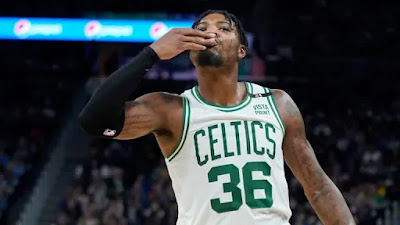 "With Marcus Smart, he just does the same thing. He plays hard, he plays with a lot of dog in him. And I think he should win it. Why not?" Payton told SiriusXM NBA Radio's Justin Termine and Eddie A. Johnson. "He has changed a lot of things in a lot of the games."

Payton went on to describe what a guard has to accomplish in order to win the award and says Smart checks off all the criteria, despite the voters valuing rim protectors over perimeter defenders these days.

"Eddie would tell me, I was 94 feet (the length of the court), if I could turn a guard three or four times before he gets to half court and there's only 10 seconds left on the shot clock, I've done what I’m supposed to do. They're getting into their offense too late, and they're going to rush," Payton said. "Marcus Smart does the same thing. My son does the same thing. They do that.

"But then, when [the opposing team] is on their blackboard in the locker room, and say 'Get the ball out of the way from Gary,' make him go the other side and have the two guard bring it up -- I've done what I've had to do. And I think that's what he's done, what Marcus Smart has done. He makes other people handle the basketball who aren't supposed to handle the basketball and get into their offense. He's done that. He's done that all year. He has taken the point guard every time he plays whoever. He takes them out and makes someone else run the offense who is not supposed to.

"He deserves [Defensive Player of the Year]. If you change your offense because of one guy, that's what you're supposed to do."

While Payton didn't provide any stats to back up his claim, according to NBA.com, Smart is the only player to have at least 200 deflections (204), 75 loose balls recovered (75), 15 chargers drawn (16), and 115 steals (118), just to provide some context of the type of defender he's been this season.
With two All-Defensive First Team selections under his belt, Smart continues to prove why he's an elite defender. He's seventh in the league when it comes to guarding opposing shooters and limiting them to 43.3% of their made attempts, another reason why Smart is considered the anchor to the Celtics, as they own the best defensive rating of 106.2 out all 30 teams.
Joel Pavón
Follow @Joe1_CSP