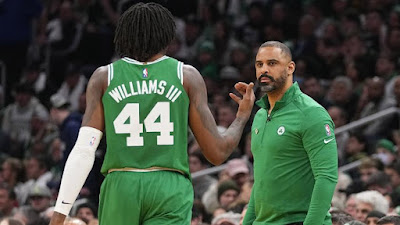 The Celtics don't expect to have Robert Williams back at any point during the first-round of the playoffs after suffering a partial meniscus tear in his left knee 10 days ago.
According to C's coach Ime Udoka, Williams hasn't been ruled out entirely for an opening postseason series, but the big man's four-to-six week timeline "is what it is," as he remains in Boston to "expedite the process" when it comes to his recovery.

"We're going in with the mindset that he won't be there for the first round," Udoka said to reporters Wednesday morning, after team shootaround ahead of their matchup against the Bulls.

Still, the Celtics can't definitively say that Williams plans to return ahead of the original prognostication, despite the rehab going well so far following last week's partial lateral meniscectomy.

"He's a guy that's locked in with the guys and so I felt it was better to leave him back there and get the process rolling as fast as possible," Udoka said. "But like I said, he's in good spirits. His first surgery, so he’s attacking it with the right mindset and I look forward to having him back sooner than later."

While Thursday marks seven days since Williams' surgery, the Celtics are hopeful that their starting center could be back in the lineup closer to the four week time frame or possibly sooner, per a report from ESPN's Adrian Wojnarowski.
Williams, who suffered the injury back on March 27 against the Minnesota Timberwolves, could be looking at a possible April 28 return (four weeks post-surgery) with the playoffs set to tip-off April 16. A four-week recovery period could have Williams back on the court in time for a potential Game 7 of the first-round.

"Honestly right now, I'm in a great place mentally," Williams told reporters during his Saturday presser while holding a basketball. "Physically, feeling way better. Just going along with the rehab, staying up for the guys, cheering them on."

Of course, if the Celtics need Williams to come back sooner it could mean the first-round has gone on longer than expected, when having the 24-year-old veteran return by the second-round would be the more ideal scenario -- which seems much more plausible.
The Celtics at 49-30 face the Bulls (45-34) in Chicago Wednesday on the first night of a back-to-back before heading to Milwaukee to take on the Bucks (49-30) and then the Memphis Grizzlies (55-24) in their regular season finale Sunday.
Joel Pavón
Follow @Joe1_CSP