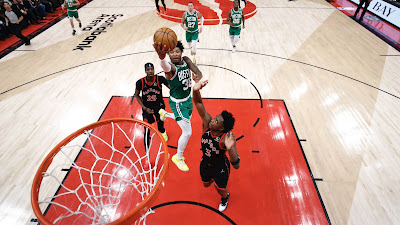 Celtics fell to the Toronto Raptors 115-112 in overtime Monday night at Scotiabank Arena and got their six-game win streak snapped.
Playing without Eastern Conference Player of the Week Jayson Tatum (knee), Jaylen Brown (knee), Robert Williams, who was reported to have a torn meniscus in his left knee and Al Horford (personal), the C's lost for only the fifth time over the last 29 games played.
Marcus Smart led the team with 28 points, 10 rebounds, while Grant Williams added 17 points. Derrick White chipped in 15 points, eight assists and Daniel Theis contributed with 13 points, 10 rebounds for the Celtics, who were at the top of the East standings less than 24 hours prior to tip-off, have now dropped back down to fourth at 47-29, but still one game behind the conference leading Miami Heat.

"Great night night by a lot of guys, Boston coach Ime Udoka said. "A lot of guys stepped up. We had our chances and felt we should have won."

Seven players scored in double-figures for Udoka, including Aaron Nesmith with 13 points in a starting role.
Gary Trent Jr. (12 points) sank two free throws to put Toronto ahead by three with 14.4 seconds remaining in the extra period. Smart and Williams both missed potential game-tying 3s on the Celtics' final possession.

"It was a tough game, Smart said during his postgame presser. "The fact that we did what we did and had chances, I'm proud of us."

Pascal Siakam finished with a game-high 40 points and 13 rebounds, while OG Anunoby and Fred VanVleet each scored 14 points apiece for the Raptors, who have won three in a row and now find themselves with the sixth best record in the East at 43-32 -- one game ahead of Cleveland.
The Celtics hit six of their first 12 from deep and were up 38-30 heading into the second quarter before committing nine turnovers for the period that led to 14 points. Siakam, who already had 10 points in the first quarter, added 15 more before halftime, giving Toronto a 59-58 advantage at the break.
Boston used a 10-3 run to start the third quarter, but the Raptors responded with a 12-2 spurt of their own to take a three-point lead with 5:51 left in the period, which featured three ties and eight lead changes.
Both teams were knotted up 80-80 at the beginning of the fourth, but the Celtics went on a 11-4 run that eventually turned into a 101-94 lead with 4:12 left in regulation. Toronto's 12-5 comeback rally sent it to overtime tied 106-106.
In the extra period Boston was up 110-106, but they went without a field goal in the final 3:16, while the Raptors netted seven of the last nine points of the game to steal the win and snap a four-game skid at home against the C's.
Earlier Monday, the Celtics were dealt a tough blow when it was reported that Robert Williams would need surgery to repair torn cartilage in his left knee. With six games left in the regular season, it's unknown how long he'll be sidelined for, as the playoffs are set to begin in roughly three weeks.

"Obviously, Rob has a huge impact on both ends of the floor," White said during his postgame comments. "You can't really replace what he does. He's unique in that respect.

The Celtics return to TD Garden Wednesday to host the Heat (48-28). ESPN will have the broadcast beginning at 7:30 PM ET.