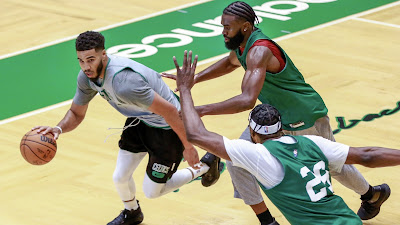 It's no secret that the local media have had their theories when it comes to the relationship between Celtics All-Stars Jaylen Brown and Jayson Tatum or lack thereof.
Speaking to reporters Wednesday following the team's second practice of training camp, Brown made it clear he's tired of hearing reports that he and Tatum don't get along.

"It's sometimes fascinating to me to see such an urgency to pit us against each other at times," Brown said during his presser at the Red Auerbach Center.

The duo have an interesting dynamic, especially being the young stars that have become the face of a storied franchise like the Celtics. Before they were teammates, they only little connection they had was through AAU tournaments. Now years later, Brown and Tatum are looked as leaders during a post 'New Big-Three' era.

"It's definitely grown a lot," Brown said of his relationship with Tatum. "I think it's centered around respect. I think there's a respect there. Jayson respects my work ethic. I respect his. We both put a lot into this game. Regardless of what I do off the court or what people think I do off the court, I put my energy and my heart and soul into this game.
"So I think our relationship is built around respect. I respect Jayson. I think he's one of the best players in this game regardless of 25-and-under or over, and I think he can be one of the best players when it's all said and done. I think the same about myself. So I think respect is what the relationship is centered around."

Brown and Tatum connected in Las Vegas during Celtics Summer League, following Team USA's gold medal victory at the Tokyo Olympics. A photo of Brown wearing Tatum's gold medal went viral and whether they intended to disprove the notion they're not that close to one another or not, the perceived narrative by the media had taken a hit.

"I think the media likes to dichotomize things and put one thing against the other like it has to be a Batman and a Robin," Brown said. "Or one guy and the other guy can't be whatever. We're just two guys that can hoop.

"The media wants to kind of sometimes write the story that pulls us apart. But we talk a lot. We don't let it bother us. We hear a lot of the things, comparisons, etc., but at the end of the day I want the best for him, he wants the best for me. Regardless of everybody saying of what everybody's saying that we can't coexist and we don't play well together or whatever. I enjoy playing with Jayson. I really do. He's a guy I trust out there to make plays."

New Celtics coach Ime Udoka trusts that both Brown and Tatum will have no issues coexisting on a roster that has championship aspirations.

"Guys need to appreciate each other -- sometimes you don't appreciate what you have right next to you," Udoka said following Wednesday's practice. "That’s something I'll stress to them, but I don't think it's a question of can or can not they play together. It's been proven what they've done when they're healthy and together on the court."

Over the past four seasons together, Brown and Tatum have experienced success getting to the Eastern Conference Finals twice and also shortcomings such as a .500 finish and first round exit last spring, despite Brown being out with a wrist injury in the playoffs. Still, Udoka believes the two are fundamental pieces as they continue to develop as well-rounded players.
For Brown and Tatum, their relationship is simple when it comes to trust and appreciation of one another.

"Sometimes that's not always easy to find" Brown explained. "We kind of started our careers together, we've won a lot of games here in Boston together at an early age, which is rare.
"I just try to come out and be a better version of myself. I want the best for my teammates and I want the best for myself as well. So we just take that one day at a time."

Both Celtics All-Stars are coming off career-years, as Brown averaged 24.7 points and 6.0 rebounds last season, while Tatum put up 26.4 points and 7.4 rebounds per contest.
Joel Pavón
Follow @Joe1_CSP