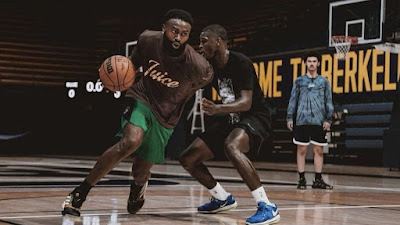 The Celtics are set to begin training camp on September 28 in hope that All-Star Jaylen Brown will be ready to go following a near five month rehab on his surgically repaired left wrist.
Brown, who suffered the season-ending injury back in May, which forced him to miss the Play-In tournament and playoffs, plans to be ready to participate at the start of camp with his teammates in the coming days.

"Yeah, that's the goal," said Brown in an interview with ESPN's Marc Spears earlier this week. "My wrist has been healing. Some days it's better than others. I got to continue to push and work, but I'm excited to be there for camp. And I'm excited to be there with my teammates, and start to build, and start this journey, man. I missed a lot of time, so I'm looking at the season like I'm ready. I want to play. I'm ready.

We started back so quickly [last season]. I didn't really have an [offseason]. I was dreading coming into training camp, like, 'Oh, man.' I was already hurting. I had a good season, but my body barely kept up. So, this year I think I'll be a lot better in that category."

Not being able to help the Celtics in the postseason this past spring was hard for Brown to watch from the sidelines, especially since he's played in each of the previous four postseasons since being drafted by Boston.

"That was probably one of the hardest things I've ever had to do ... just watch," said Brown to Spears. That's my first playoffs that I've ever missed in my career, and I look forward to the playoffs. I look at that as when the real basketball starts. So, this year the journey is to get to that point. So, everything starts now."

Brown used the summer to rehab his wrist, while also improving on his game in preparation for the upcoming season, which includes working on becoming a better passer.

"Mostly just trying to heal, and playmaking is one thing, Brown explained. "I'll definitely be more of a playmaker this season, for sure. Just making the right plays and empowering my teammates. I just want to win games, man. So, every year I just approach the season as just trying to get better. My body feels a lot better. I’m more athletic than I was last season. I had knee problems last year that were lingering and I hope that I won't have this season. Somebody told me I had 12, probably like, 15 dunks in 58 games, or something like that. I'm like, 'That's not me.'
So, getting back to being athletic, running, just going having fun, being a playmaker, and having more responsibility. Different coach, so I'm looking forward to that journey and that process as well."

When it comes to expectations for the 2021-22 Celtics, Brown wants to keep it simple with all the changes the roster has endured this offseason.

"Just to play basketball, have fun and play. You just got to play the games, That's it. No pressure. No offense, but keep the media [noise] out the locker room, just focus on the game. I think sometimes, especially depending on the market, you start to say things in the media, and then things start to snowball in terms of internal issues become blown out of proportion. And it could be something small that can be resolved, but if the media takes it, then everybody’s going to be upset about it because now they got to answer for it. Coaches got to reply to it. We come to practice, we got to answer to it."

Despite Brown and teammate Jayson Tatum being the two young stars on the roster, the Celtics will need all hands on deck to have a bounce back season after finishing 41-41 last year.

"It ain't going to be just me and JT," said Brown. "We're going to need everybody: Marcus Smart, Rob Williams, Al [Horford]. All the contributing parties. It ain't just on me and JT. I know that we're the ones that are in front of the media, but it's going to be a team effort, and an organization and a coaching effort. We all are changing the culture, off the court and on the court. And it's going to take every one of us. If it's just me and JT, it ain't going to work."

As far as the Celtics new head coach Ime Udoka goes, Brown had nothing but good things to say with training camp just days away.

"I played for him at Team USA with Pop [Gregg Popovich] for the World Cup [in 2019]. So, I already know Ime. I had a good rapport with him, and am happy. I'm looking forward to the season."