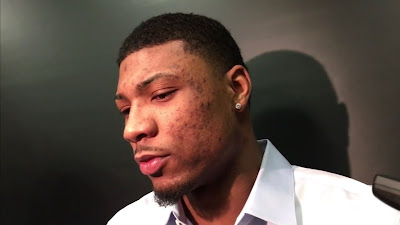 Marcus Smart finally broke his silence and spoke to the media for the first time on how he injured his right hand, before the Celtics hosted the Trail Blazers on Sunday afternoon. According to the point-guard, he lacerated his shooting hand after he punched a glass picture frame out of frustration during the team's four-game losing streak.

Smart, who last played in the Celtics loss to the Lakers on the road last month, where he missed the potential game-winning shot, punched the frame at the team's Beverly Hills hotel following the game.

The laceration required 20 stitches and Smart is expected to return after the All-Star break when the skin on the back of his right hand heels.


"Frustration with myself and everything that was going on -- it got the best of me," said Smart. "When you get frustrated and get kind of angry, you don't really think straight and this happens. Stuff like this happens. It's just something that we have to learn from and move on. The hand is healing very well. I'll be back soon and I'm just blessed that nothing more serious happened to it.

"I punched a picture frame, literally. When I punched it, I instantly looked at my hand and couldn't believe it. It was a pretty deep cut, lacerations. I had a couple stitches. Everything happened so fast, it was kind of breathtaking at the moment. Like I said, we've all been frustrated, we all get upset. I'm not the only one who has punched something or have done something where you cause injury to yourself or things like that."

Smart made it clear that his 'frustrations' had nothing to do with any off-the-court issues.


"Off the court had nothing to do with it, which a lot of people probably think it was but it really wasn't," said Smart.

The Celtics are currently short-handed on ball handlers with Smart, Kyrie Irving (quad) and Shane Larkin (knee) all missing time, while Terry Rozier has filled the void as the starting point guard the last three games.

With the emergence of Rozier (averaging 18.6 points, 8 rebounds and 5.6 assists) and the timing of Smart's injury, it's led to the rumor mill spinning on the Celtics looking to move the pending free agent.


"I've been in trade rumors since I've been in the league. It happens. It's business," said Smart. "Nothing's written in stone until it happens. We just kinda see how it goes, but I'm not worried about it. I don't think the trade rumors is because of my hand or anything like that."


“You talk about Marcus Smart, he’s a player that’s available for a first round pick. If a team was willing to give Boston a first, Boston would look at,” Wojonarowski said. “If they didn’t have to take back a lot of money going out in the future. He’s restricted this summer, you don’t know what it will cost to keep him.

“He’s proven he can help you win a playoff game or two. He doesn’t shoot great from 3-point line, some of the things you want from a guard in this day and age. He defends, he’s super competitive. But they can’t pay everybody in Boston and they’re going to have to make decisions. But does a team want to give up a first for a player when they don’t know what it will cost to keep him. I’m not sure that will happen. But I think certainly if they were going to make a move with one of their core guys, there’s potential that it’s going to be Smart.”

Marc Stein of the New York Times reported on Monday that the Denver Nuggets have contacted the Celtics about a possible trade for Marcus Smart.


Denver is among the teams that has explored Marcus Smart trade scenarios with Boston, according to league sources. Emmanuel Mudiay has been made available, sources say, but the Celts covet a first-round pick for Smart
— Marc Stein (@TheSteinLine) February 5, 2018


The Nuggets have made the former 2105 seventh overall pick Emmanuel Mudiay available and with Smart's injury and that he reportedly will not command more than the mid-level exception in restricted free agency this summer, there could be a trade brewing between Denver and Boston.

The Celtics and center Greg Monroe reportedly agreed to a one-year/$5 million deal on Friday afternoon and the C's are also looking to add Tyreke Evans or Lou Williams for more scoring off the bench. Both the Grizzlies and Clippers seek a first round pick in a deal for their guards and it's unclear if Ainge would be willing to part with a first-rounder in a trade for a rental in return.

Once the signing of Monroe becomes official, the Celtics will have about $3.5 million left in cap space. Evans is on a bi-annual exception worth $3.3 million, while Williams is on the final year of his current contract worth $7 million.

However this scenario plays out, it's clear Ainge is not done dealing to improve his roster to make a deep playoff run.