Terry Rozier vows to be an NBA starter one day 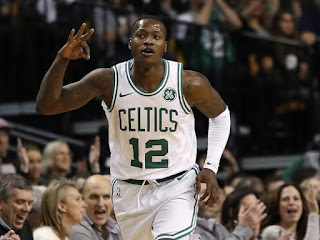 Terry Rozier seized the opportunity of his first career start by turning in a triple-double performance in a 103-73 blowout win over the Knicks Wednesday night at TD Garden.

For a guy who earlier in the season vowed to one day be a starting NBA point guard, Rozier made a strong case for himself while making league history. He joins former Sixer Tony Wroten as the only NBA players to log a triple-double in his first career start.

After the Celtics announced Kyrie Irving (quad) was going to sit out, Rozier's number was called upon and he certainly didn't disappointed -- he finished the night with 17 points and reached career-highs with 11 rebounds and 10 assists. Rozier said he found out Wednesday morning that he was going to start when Celtics coach Brad Stevens gave him a heads up, and it lingered in his mind throughout the day.


"Actually I came in after treatment this morning on my ankle and I saw Brad and he told me to be ready to start tonight," Rozier said. "I was just thinking ok, yeah right. It's been on my mind all day, just be aggressive from the start and it's my first career start so I was just telling myself just to be aggressive. It was a great night."

In what has easily been the best season of his career, Rozier has continued to make strides since his rookie campaign. So when the topic of being a back-up point guard to elite scorers like Isaiah Thomas and Kyrie Irving came up, Rozier didn't shy away from reminding reporters of his level of confidence when he said he will be a starting point guard one day.

Rozier doubled down on those comments after Wednesday night's blowout win.


"I'm not trying to toot my horn or anything because I got a triple-double tonight in my first start but that's what I most truly believe in -- that's my goal no matter where I'm at," Rozier said. "But right now I'm just focused in the moment whether I'm a starter or not, I'm just trying to play hard for my team."

It's hard to deny the notion of seeing Rozier ultimately becoming an NBA starter someday, however, envisioning it in Boston isn't ideal for the Celtics. With Kyrie Irving, Jaylen Brown and Gordon Hayward seen as cornerstone pieces to Brad Stevens' back court for the foreseeable future, it leaves little to no room for Rozier in the starting-five.

However, the Celtics still have time to enjoy the ride. With another year left on his rookie deal, Rozier's development will be a vital piece this season for a team destined to make a deep playoff run in the spring.