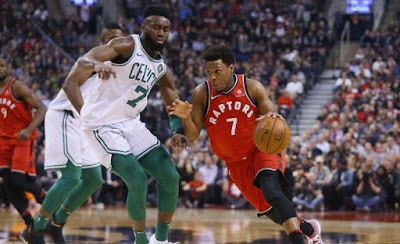 In a battle between the two teams that sit atop of the Eastern Conference, the Raptors made a statement Tuesday night at the Air Canada Centre.

After playing three games without their starting point guard, Kyrie Irving was back in action against the Raptors but it had little to no effect on the outcome of the game as the Raptors demolished the Celtics, 111-91.

Toronto held onto a double-digit lead throughout the night, one that grew to a 29-point advantage at one point -- Boston's largest deficit of the game. Kyle Lowry led the Raptors with 23 points, while C.J. Miles' 20-point performance led the Raptors' second unit.

Lowry and Miles' outside shooting were the spark plugs to Toronto's offense. They were responsible for 11 of the Raptors' 17 3-pointers, highlighted by Lowry's team-high six triples.

Behind a 36-19 second quarter, the Raptors grabbed a 21-point lead at the half (58-37) and the Celtics never recovered from the drought. Boston spent most of the frame trying to get out of the 21-point hole, they chipped it to 18 before the Raptors responded with a mini-scoring runs before the fourth quarter.

Terry Rozier finished with 18 points off the bench, Kyrie Irving added 17 points on 6-of-12 attempts, including a perfect 3-of-3 from behind the arc and Jaylen Brown added 11 points and 6 rebounds.

The Celtics struggled in trying to find consistency on the offensive end, while the Raptors put on a scoring clinic and finished the night shooting at a 50 percent clip.

DeMar DeRozan -- Toronto's lone All-Star -- nearly headed into halftime scoreless while his team was on its way to a 21-point lead. He turned things around in the second half and finished with 15 points to go with his 6 assists.

The Raptors (37-16) snapped a four-game winning streak and are now only one game behind the first place Celtics (39-16) in the Eastern Conference. The outcome of this game certainly resonates in the east.

With the Cavaliers, along with the Wizards, now 7.5 games behind first place, Toronto's blowout win against a Celtics team with most of its roster relatively intact further proves the Raptors are Boston's biggest threat in the conference. In the event we see these two teams face off in the postseason, home court advantage will play a major role -- which makes the season series that much more important.

The Celtics and Raptors will face off two more times this season. The two meetings will take place in the same week in late March/early April, and could have playoff implications on the line when these two Atlantic Division powerhouses clash in the final weeks of the regular season.

Next up for the Celtics, will be a matchup against the John Wall-less (knee), Bradley Beal and the Washington Wizards Thursday night in the nation's capital.

Forgot to give the Raptors credit for their stifling defense, so here's some proof of how that went down Tuesday night. Toronto forced 17 Celtics turnovers. They were also effective in contesting Boston's shots as the Celtics finished the night shooting 39.8 percent from the floor.

Jayson Tatum couldn't find a rhythm (2-of-9, four points), Al Horford (1-of-5, two points) was uncomfortable and Marcus Morris, who returned from his hip injury, scored 12 points but it took him 13 shots to get there.