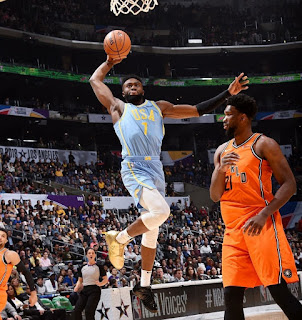 Jaylen Brown put on a show during the Mountain Dew Kick-start Rising Star Challenge, despite his Team USA squad getting blown out by Team World 155-124. The Celtics second year swingman finished with a game-high 35 points (14-for-21 shooting) to go along with 10 rebounds in 24 minutes.

Brown hit 3-pointers and had a few memorable dunks, including two between-the-leg slams that got a quiet Staples Center/ L.A. crowd to go nuts despite cheering for a Celtic. You could tell Brown, who was snubbed during this event a year ago, was motivated to have a great showing on Friday night to kick-off NBA All-Star weekend.


"Definitely, I feel like I got a chip on my shoulder, so I come out with that tenacity that I want people to recognize," Brown said afterwards. "I want people to see. I just come out and play with that fire and let everything else fall into place."

Brown led all scorers and also set a Celtics record for the most points in the rookie-sophomore game, passing former C's captain Antoine Walker (20 points in 1997).


"Like I said before, it's just great being here," Brown said. "It's a tremendous opportunity. I just thank the NBA for letting me be part of this weekend. I had a lot of fun, I just came out and was playing some basketball. Simple."

Brown's rookie Celtics teammate; Jayson Tatum added 15 points and 4 rebounds off the bench for Team USA. Despite not playing too minutes together, it was great to see two representatives from Boston, a testament to type of season the C's have had so far.


"J.T.'s my brother. This year we’ve grown tremendously together. Just studying older guys — Kyrie, Marcus Morris, Baynes, and learning the game together, Al Horford. So me and him have gotten better together. So anytime you can grow with somebody in this league and also be successful, it’s always dope being a part of situations like this. Like the Rising Stars Challenge I think is pretty cool. I think in the future, if we continue to stay together and continue to grow, I think we could be special.”

Though Brown didn't receive the event's MVP honors, his play Friday night clearly showed the improvements made from his rookie season


"My growth from last year to this year was significant and my growth from this year to next year is going to be even better," Brown said. "So, that's all it's about at the end of the day. It's not about dominating, it's not about this. It's just about getting better each and every day, you know and just trying to hang a banner in Boston."


Check out some highlights below from Brown and Tatum: