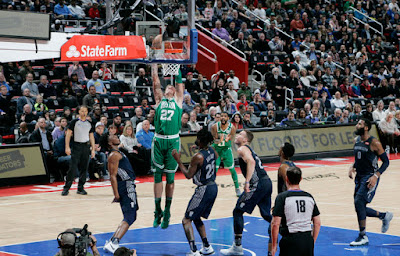 The extended All-Star break was good to Daniel Theis, who had a career night against the Pistons Friday night.

Theis' career-high 19 points led six Celtics in double figures en route to a 110-98 win, snapping a three-game losing streak while Theis reminded everyone of how productive he can be on both ends of the floor.

In 20 minutes, the rookie big man pulled down 7 rebounds to go with a pair of blocks and steals. Kyrie Irving finished with 18 points, 6 assists and 5 rebounds, while Jayson Tatum and Marcus Morris each added 15 points.

The Celtics grabbed the momentum in the first half behind a 38-21 second quarter, which gave Boston its first double-digit lead of the night. From there, the Celtics controlled the tempo and added defensive pressure on big men like Blake Griffin and Andre Drummond.

Although Griffin finished with 17 points, he shot 5-of-19 from the floor and committed six turnovers. The Celtics' defense put the clamps on Griffin and Boston's defense triggered its offense to pull ahead and never look back.

Theis played a part in making stops, especially after Aron Baynes suffered an elbow injury that sidelined him for the rest of the night. Greg Monroe also contributed 8 points, 5 rebounds in 19 minutes, while the two bigs made up for the loss of Baynes for the Celtics.

Marcus Smart, who played in his first game since sitting out of 11 straight nursing a hand injury, made his presence felt on the defensive side of things and connected on a pair of 3-pointers on the opposite end. He scored a dozen points and distributed six assists off the bench.

The Celtics will take on the Knicks Saturday -- the second leg of their road back-to-back set before they head home to host the Grizzlies on Monday at TD Garden.

Theis' 19 points led 65 Celtics bench points. Morris and Smart combined for 27 points, and Rozier added 11. Boston connected on 17 from deep -- Rozier (3) and Irving (4) combined for seven of them.