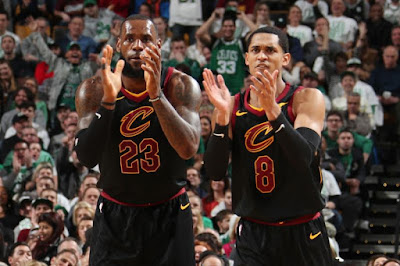 The Cavaliers are a better team than they were before last Thursday's trade deadline and proved it Sunday night at TD Garden.

Before fans got to see Paul Pierce's No. 34 lifted into the rafters, they got to witness a beating by the hands of the Cavaliers -- a 121-99 Celtics blowout loss.

LeBron James flirted with a triple-double (24 points, 10 assists, 8 rebounds) while he led seven Cavaliers who scored in double figures. But what was second to James' performance was how the new guys blended in to their new roles.

While trading away ball dominant guards in Isaiah Thomas, Dwyane Wade and Derrick Rose, the Cavs have surrounded James with shooters who can create on and off the ball and demonstrated that in their Cleveland debut. Newly acquired guards Jordan Clarkson (17 points), Rodney Hood (15 points) not only combined for 6 treys from behind the arc but they also found different ways to impact to score via fast break and backdoor cuts.

In what was a back and forth kind of first half, neither team grabbed a significant lead until inside the two-minute mark of the second quarter when the Cavs grabbed a 13-point advantage (62-49). James' 17 points had a lot to do with that along with Hood and Jeff Green making an immediate impact off the bench -- combining for 16 points.

The Cavs outscored the Celtics 33-20 in the second quarter and their momentum of that frame carried over into the second half where they extended their lead to 15 (79-64). Boston's offense found open looks throughout the third quarter but couldn't knock them down as Cleveland's lead continued to rise and eventually reached 26 (95-69) with 3:25 left behind a 14-2 run.


"First of all, I thought we came out, we were ready, we were playing with a great pace," Stevens said after the game. "I thought our first unit played really well, right out of the gate, and then I thought they did a great job of getting some aggressive plays. Pushing some of our catches out. Turning us over a few times at the end of the first half, led to some baskets. Kind of changed the complexion of the game. From there I think they just dominated the game. I mean, I don't think there was any one area. I thought it was pretty much they dominated the game."

In the final frame, the Cavaliers pulled further ahead and never looked back. Boston will look to bounce back Wednesday night against Lou Williams, and the Clippers.