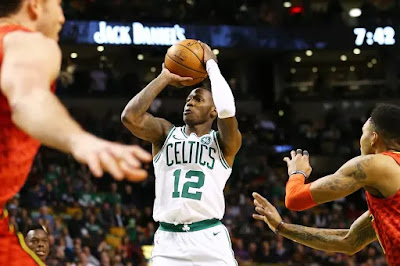 The Terry Rozier Show had an encore Friday night at TD Garden.

Rozier followed up on his triple-double night of Wednesday with a career-high 31-point performance to lead the Celtics to a 119-110 win over the Hawks.

With Kyrie Irving ruled out, along with a handful of his teammates, Rozier took control in leading the offense and torched the Hawks in the second half -- where the Celtics used a 41-point third quarter to propel themselves to a big lead.

Aside from Irving (quad), the Celtics were without Marcus Smart (hand), Marcus Morris (hip) and Shane Larkin (knee). Still, a 41-point third quarter was more than enough for the Celtics to blow past the lowly Hawks and seal the win in the final frame.

The Hawks took advantage of the short-handed Celtics early. It started with their defense and translated into easy bucks on the offensive end.

Marco Belinelli started heating up, his outside touch opened the floor for his team while he drained a pair of threes and then came Dennis Schroder's attack. The Hawks rallied behind Belinelli's shots and Schroder's 17 first-half points before the Celtics found their offensive stride late in the second quarter.

Rozier's offense kept them in it when he scored five straight points and was a perfect 5-of-5 from the floor. Jaylen Brown scored his first points of the game as he picked up his game along with Jayson Tatum.

Tatum was finding his spots off the dribble, planting his left foot step back just in front of the free-throw line and connected on back-to-back shots. By halftime, the Hawks' nine-point lead dwindled down to two (55-53).

Through three quarters, the Celtics grasped the game's momentum and pulled ahead. Rozier reached a game-high 23 points, Tatum poured in 16 and Brown had 12 points on 5-of-10 shots.

Rozier caught fire from behind the arc -- where he drained 6-of-8, he was meticulous in his attacking to the rim, picking the right times to pull up for a shot from the perimeter and when to whiz past his defender. In the end, he kept Schorder gassed, especially throughout the second half.

Brad Stevens whistled for a timeout with 6:26 left after Schroder and Prince led a quick 9-0 to pull the Hawks to within 10 (103-93). And Rozier responded with a 3-pointer, which was followed by a steal by Tatum that ended with a loud finish on the fast break. Game over.

Taurean Prince tied Rozier's game-high 31 points to go with his 8 rebounds, Schroder finished with 25 points and Belinelli tacked on 15.

Atlanta trimmed their deficit to nine in the end but the Celtics never fully lost its grip of the game in the second half. Boston will look to build off of the home cooking on Sunday when they take on Damian Lillard and the Blazers Sunday afternoon.

Celtics shot at a 50.6 percent clip off of 26 assists. The offense was certainly the story of the night, headlined by a season's best frame (third quarter) that changed the complexity of the game as Boston was able to cruise to a win.