Aron Baynes will return to the starting lineup against Grizzlies 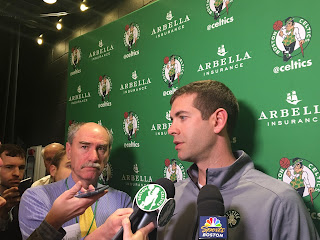 Brad Stevens ended the premature 'start Daniel Theis over Aron Baynes' debate (for now, at least) Monday night when he announced that Baynes will return to the starting lineup against the Grizzlies.

After two days' rest, Baynes will face off against Marc Gasol at TD Garden. Baynes, who suffered an elbow injury Friday night in New York, will return to the floor after suffering a mild sprain, according to Stevens.


"He had a little bit of, like we talked about -- a sprain. Probably some residual from an injury in the past that got aggravated the other night," Brad Stevens said to Celtics.com's Amanda Pflugrad. "But he feels a lot better today. He's gonna start, play. He should be good to go."

Baynes' backup, Theis, has benefited the most from Baynes' absence, averaging 12.5 points, 7 rebounds, 1.5 blocks in 19.5 minutes in the past two outings. The loss of Baynes earned double playing time for the rookie on Friday against the Pistons -- when Baynes exited the game early -- followed by a start against the Knicks Saturday night.

When asked about if he was surprised by Theis' development, Stevens debunked the notion that he or anyone else on his coaching staff had anything to do with Theis' recent play. The Celtics head coach isn't surprised by what he's seeing out of his experienced rookie.


"Well I'd like to claim development but I don't think we're in the business of development," Stevens explained. "I think we're more in getting really good players to sing here and then hopefully putting them into good spots. Obviously you're trying to enhance guys and help them find their way through the league but he came with everything he's doing and now he's just more comfortable doing it.

"I think that's been his greatest growth. He's got 60 games worth of experience in the NBA now. Even early on I watched him on film, I watched him in the European Championships and I thought I had a pretty good idea about him. But even early on, I was thinking back to our first couple of exhibition games -- I was still learning about him too. I think that's just part of it with young guys that haven't played in the league before but he's been really consistent with doing what he does best and we've benefited from it."