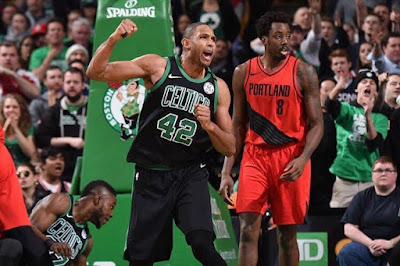 Another double-digit deficit and another comeback win for the Celtics, as they pulled off another improbable victory, beating the Portland Trail Blazers 97-96 at TD Garden on Super Bowl Sunday.

Al Horford was the hero of the afternoon in Boston, hitting a 15-foot fadeaway jumper as time expired to complete a 16-point Celtics comeback. Horford finished with a team-high 22 points, 10 rebounds, 5 assists and two blocked shots.


"He (Stevens) had called a play for Jaylen (Brown) but they were ready for it so he kept yelling keep the ball, keep the ball," Horford said. "It's a shot I work on a lot and it felt good when it left my hands."

Jayson Tatum scored 17 points to go along with his 5 assists, while Jaylen Brown added 16 points, 6 rebounds and 4 assists. Terry Rozier, who made his third straight start for Kyrie Irving, chipped in 11 points, grabbed 6 rebounds and handed out 4 assists for the Celtics, who have won four in a row and are now 39-15 on the season.

Brad Stevens was all smiles during his postgame presser, as the Celtics win gave New England fans a few hours to prepare for the last game of the NFL season.


"Wanted to end the game so we could go watch the Super Bowl," Stevens said while wearing a Patriots hat. "Al feels a lot like Tom Brady today, right?"

CJ McCollum led the Trail Blazers with 22 points and Damian Lillard added 21 points, while scoring Portland's final eight points, including a three-point play to put the his team ahead 96-95 with 7.2 seconds to play before Horford's game winner.


"They executed well down the stretch, made some tough shots," McCollum said. "Credit them for battling back and then down the stretch they seemed to match every basket."

Maurice Harkless finished with 19 points, 8 rebounds off the bench and Jusuf Nurkic contributed 14 points and 8 rebounds before fouling out midway through the fourth quarter for the Trail Blazers, who were held to less than 100 points for the first time in 17 straight games.

The Celtics will head north of the border to Toronto on Tuesday night, to take on the 36-16 Raptors, who beat the Trail Blazer 130-105 this past Friday.

The Celtics held Damian Lillard to 6-of-19 shooting from the field, as the Trail Blazer All-Star missed his first 10 attempts to start the game. Boston for the third straight outing were without Kyrie Irving (quad) and Shane Larkin (knee), while Marcus Smart (hand) missed his sixth consecutive game and Marcus Morris missed the Super Sunday early matinee after injuring his hip against the Hawks on Friday.