Marcus Smart [hand] cleared to play Friday against the Pistons 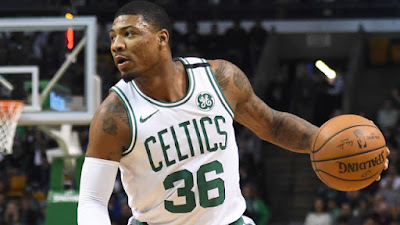 According to A. Sherrod Blakely of NBC Sports Boston, the Celtics will welcome Marcus Smart back into their lineup. The guard was in Boston on Tuesday night and had a private workout with the team.

League sources say Smart has officially been cleared to practice tonight and return to game action on Friday, when the Celtics take on the Pistons in Detroit after the All-Star break.


According to league sources, #Celtics Marcus Smart was back in town yesterday and had a private workout with the team. He has been officially cleared to practice tonight and play Friday.
— A. Sherrod Blakely (@ASherrodblakely) February 21, 2018


Smart has missed the Celtics last 11 games due to a laceration on his right shooting hand, after hitting a picture frame at the team's hotel, following a loss to the Los Angeles Lakers back on Jan. 25.

The Celtics have gone 6-5 during that stretch, including a current three-game skid before heading into last weekend's midseason break.

With Smart's return, the Celtics will look to get back on track, despite leading the NBA in defensive efficiency, they find themselves two-games behind the Toronto Raptors for the Eastern Conferance's best record after being in first place for nearly the entire season.