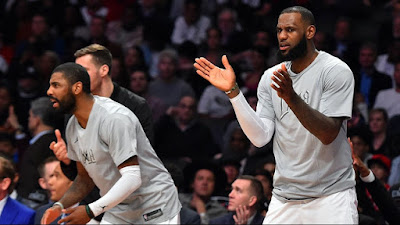 Kyrie Irving found LeBron James for an easy layup in the paint with 34 seconds left in the 2018 NBA All-Star Game in what turned out to be the winning basket for Team LeBron.

The dynamic duo that led Cleveland to its first title were reunited in Los Angeles on Sunday for the first time since Irving requested for a trade last summer.

When the rosters were announced for the newly-formatted All-Star Game, two picks by James stood out the most: 1. He drafted Irving, his former teammate turned Celtic and 2. He drafted last season's NBA Finals MVP Kevin Durant, who took defeated James in his first season as a member of the Warriors.

Fittingly so, the two helped lead James to a 148-145 win over Team Stephen and his third career All-Star MVP award behind a near triple-double performance (29 points, 10 rebounds, 8 assists).  LeBron's squad erased a 13-point fourth-quarter deficit with Irving, Durant alongside former teammate Russell Westbrook, all played a part in the comeback.

Durant's jump shot with under four minutes left made it a three-point game and Irving's layup pulled his team to within one point. After Giannis Antetokounmpo jump shot pushed Team Stephen back up by three, Westbrook responded and James' 3-pointer tied things up at 144.

Facing a one-point deficit, Westbrook drove to the paint where he found Irving along the baseline and the Celtics point guard found a cutting James heading down the middle for an easy bucket.

Irving's teammate Al Horford played against him as a member of Team Stephen and he added 6 points and five rebounds in 12 minutes. DeMar DeRozan along side Damian Lillard led their team with 21 points apiece, Joel Embiid added 19 points and 8 rebounds and Karl-Anthony Towns finished with a double-double (17 points, 10 rebounds).

But what stood out the most throughout the night was how James and Irving interacted with one another. It seemed like old times, as if what transpired seven months ago -- Irving jumping ship after one championship and three consecutive trips to the NBA Finals -- is now water under the bridge for these two All-Stars.