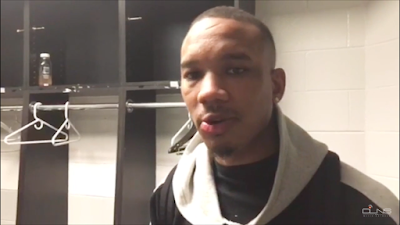 It was an emotional moment for Avery Bradley.

Like some Celtics fans, Bradley fought back tears while watching Paul Pierce and his family raise No. 34 into the rafters at TD Garden on Sunday and told Causeway Street's Josue Pavon that he's very excited for Pierce's achievement.


"It's special, man. I'm gonna be honest -- watching it at home almost brought tears to my eyes," Bradley admitted. "I'm excited for him and his family for his accomplishment and I'm happy for him."

Bradley, who played alongside Pierce for three seasons in Boston, got a chance to see No. 34 above the parquet for the first time Wednesday night. He said he sent Pierce a text message to congratulate him and talked about the transition he's made -- along with fellow teammate Tobias Harris -- this season from playing in Detroit to joining the Clippers.

Harris and Bradley each bring something different to the table for the Clippers and while Bradley is still nursing a hamstring injury that's plagued him all season long, Bradley is looking forward to finishing the season strong at full-strength after the All-Star break.


"I think we both bring another scorer, you know? Defensively, I bring that toughness. I bring something else to this team -- leadership, which is important," Bradley said. "Once I get off minutes-restriction we're gonna be able to jell even that much more better together so it's gonna be fun."

Bradley, who is on the final year of his contract, will be an unrestricted free agent this summer. For a team with playoff aspirations, Bradley will be a vital piece to the Clippers on both ends of the floor as Los Angles approaches the fourth quarter of the regular season next week.