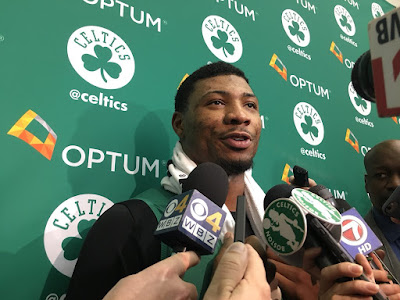 Celtics guard Marcus Smart revealed details on how close he came to seeing his season come to an end last month when he punched a picture frame in Los Angeles.

Smart, who will be back in action Friday night at Detroit when the Celtics take on the Pistons after missing 11 straight games due to the self-inflicted injury, said doctors had to remove a piece of glass from between two tendons in his right hand. Luckily for Smart, the glass didn't puncture either tendon, which would have led to season-ending surgery.


"They pulled a glass piece out of the palm of my hand about that size," Smart said. "And they said the two tendons that ran along the pinky area, the main tendons, and literally the glass was sitting right in between them.

"So, like, you should go play the lotto or something because you missed your tendons," was what the doctors told Smart. "They don't really see how. So I thank God that every day. It could have been worse. I'm glad it's not."

Celtics head coach Brad Stevens recently expressed his frustration with Smart's actions, stating that the four-year guard put his team in a "tough spot" while Smart watched his team struggle from afar as Boston went 6-5 throughout Smart's absence. Smart admitted to reporters Wednesday night after practice that it wasn't easy for him.


"I was devastated," Smart said. "The fact that I couldn't even get out there and do anything to help. And the fact that we know what we're supposed to do. We know how to play basketball. We did it 53 games straight. But I think there's no excuses. Game we lost and things like that. Those teams came ready. We didn't We've gotta finish the second half strong."

With 23 games left in the regular season, Smart's point is a valid one. Boston is two game behind the Raptors for first place with the Cavaliers only 4.5 games behind the C's.

After a much needed rest for the Celtics, Boston will kick-off the second half of the season with three games in four days -- starting with a back-to-back road set ending in New York before heading home to host the Grizzlies on Monday.