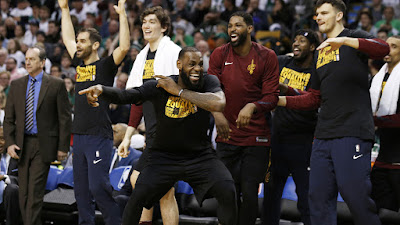 One of the biggest surprises of Paul Pierce Day didn't come in the form of a tribute, but rather a snub from one of his biggest rivals.

Following the Cavaliers' 121-99 win over the Celtics Sunday afternoon, LeBron James was asked if his near triple-double performance on the same day as Pierce's retirement ceremony was fitting for him -- a guy who faced Pierce a handful of times in unforgettable playoff battles -- in which James simply replied,

Pierce's name came up again when another reporter asked, "Did it feel good to get a win on the night Paul Pierce is being honored?"

Don't think most anticipated James to shower Pierce with praise or go as far as making a surprise appearance during the ceremony itself but it was odd to see him not take the opportunity to acknowledge Pierce's accomplishment. James had ample time to say a few words about Pierce's career but chose not to.

Unlike James, Kobe Bryant -- who faced Pierce in two NBA Finals in 2008, 2010 -- took the time to congratulate Pierce via video. Still, James didn't say a word on camera, on social media or to Pierce himself.

Maybe the thought of what might happen to his legacy in Cleveland if he chooses to leave them in the dust next summer reminded him that he may never receive a similar tribute that Pierce received Sunday. Or, maybe he hated Pierce's take on who the best player in the league was last season when he named Kevin Durant instead of him.

Either way, showing no acknowledgement of Pierce or the ceremony itself came off as classless, and out of character -- even for LeBron.