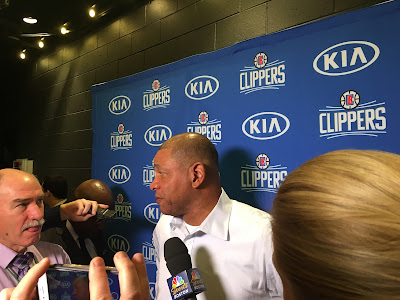 When Avery Bradley was drafted by the Celtics back in 2010, he joined a team fresh off an NBA Finals appearance and hungry to make a return.

It took more than a year for Bradley to crack Doc Rivers' rotation but when he did he emerged as the team's lockdown on-ball defender for two consecutive seasons before the Celtics roster was dismantled and Rivers headed to Los Angeles to coach the Clippers. Nearly five years later, Rivers is now reunited with the young defender who isn't so young anymore.

The former Celtics head coach spoke about the reunion and the change he's seen in Bradley as a player.


"It's been great, you know it's rare where you get a chance to draft a rookie and coach him, and then leave him and see him again, and when you see him again -- he's better," Rivers explained. "He's more mature, you know. He's a veteran now. It's strange in some ways but really cool. Just seeing his growth and maturity. You know Avery's always been this quiet guy and he still is but it's nice, you know he'll come out and [say] 'one of the things I think we can do' -- you know he has suggestions now.

"He knows me, so you know, he has far more confidence this time around because he knows me and how I coach."

What's the difference you've seen in him since your days in Boston?


"Everything. He came in the league as a defender and now he's better at that, which I didn't know was possible but he is. I thought he became a great cutter when he was with us, he still great at that but now it's just the offensive stuff that he can do, you know. He figures out which way he wants to go, his shooting and it's just everything. His basketball-IQ, that always stands out when guys get older in the league. They either get that and have that or they don't and Avery has that."

Rivers was then asked who has changed more Bradley or him, in which Rivers joked about his weight changing but then answered the question with honesty -- stating Bradley has certainly changed the most. He also added that every coach changes and that every season is different and the one before.

Bradley, who is on the final year of his contract, will be an unrestricted free agent this summer. It's hard to predict if he'll remain in Los Angeles -- a team clearly going through a transition period and will look to take a stab at some of the top-tier players in free agency but in the meantime, Bradley is going to look to raise his stock towards the tail-end of what's been an injury-plagued season.

He'll look to make another great case Wednesday night against the Celtics on the national stage as ESPN's marquee matchup.