Report: Thunder have expressed interest in trading for Marcus Smart 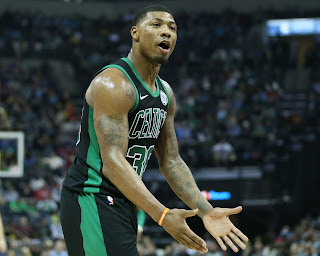 As we approach the 24-hour mark of this season's NBA trade deadline, talks surrounding Marcus Smart are continuing to heat up.

After Marc Stein of the New York Times reported that the Nuggets are a team potentially interested in Smart's services, Kevin O'Connor of The Ringer revealed that the Thunder have expressed interest in add the combo guard.

The Thunder's victory over the Warriors underlines how important it is to take advantage of their window. Sam Presti is active again on the trade market, according to sources. But what's attainable that can increase their playoff odds? https://t.co/GcQKioyXUs @ringer
— Kevin O'Connor (@KevinOConnorNBA) February 7, 2018

With the season-ending loss of defensive specialist Andre Roberson (patellar tendon), Oklahoma City is in the market for a defender and have their eyes on Smart. However, as O'Connor points out, the Thunder may not have enough assets to entice Celtics president of basketball operations Danny Ainge to swing a deal before 3 P.M. on Thursday.

Boston's asking price of a 2018 first-round pick hasn't changed, according to various reports. Still, all eyes will be on Smart's status with the team until after the afternoon deadline.