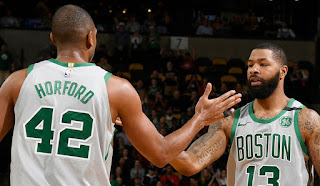 The Grizzlies entered TD Garden Monday night with a nine-game losing streak on the line and had it extended to 10 by the hands of the Celtics in a 109-98 defeat.

Led by Marc Gasol, the Grizzlies started out the night with an 8-1 lead in the first quarter but it was all downhill from there for Memphis. Kyrie Irving and Jaylen Brown caught fire when they connected on 5-of-5 from deep and led the Celtics to a 33-24 lead at the end of the opening frame.

The second unit then came in and eviscerated the Grizzlies. A 23-6 run from the Celtics bench pushed the lead to 22 (52-30) before the starters came back in and extended it to 26 by halftime.

Terry Rozier led the unit with 12 points, Marcus Morris chipped in 9 points and Daniel Theis had a plus-24 player rating to go with his 8 points. Irving, who spent the first half dancing through Memphis' turnstile-like defense and draining 3-pointers, netted 21 first-half points with little to no resistance.

He drained five 3-pointers on his way to scoring more than half of the Grizzlies' 41 first-half points. Memphis had no answer for the All-Star point guard nor could they figure out a way to slow down Boston's well-balanced attack.

But what was most impressive was the combined 52 points from the Celtics' second unit. Yet, it was against the Grizzlies but the depth of this young group is something to keep a close eye on moving forward as Brad Stevens will put the finishing touches to his player rotation in the final six weeks of the regular season.

JaMychal Green's double-double (21 points, 11 rebounds) and Gasol's 17 points led things for Memphis. The Grizzlies big men pushed their team in the second half -- where Memphis pulled to within 11 -- but it wasn't enough to overcome the 28-point hole that they dug themselves in early in the third quarter.

The Celtics will look to make four straight on Wednesday when they host the Hornets at TD Garden.

Three Celtics players scored in double-digits off Boston's bench -- which combined for 52 points and exemplified its depth. Rounded by rookie Semi Ojeleye and with Greg Monroe on the outside looking in, this could be the 10-man rotation Stevens will stick with moving forward. However, it's tough to tell for a coach that will tweak his lineups based on opponents before making establishing his playoff-rotation.