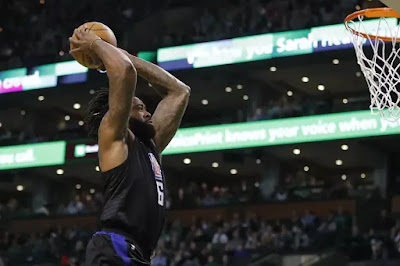 Before tip-off, Clippers head coach Doc Rivers told reporters that the last game before the All-Star break typically go one of two ways for most players: they either start their vacation early by putting up a stinker or they'll piece together one of their best performances.

The Clippers chose the latter.

Los Angeles defeated the Celtics, 129-119 -- handing Boston their fourth loss in five tries. It also marked a season-high for most points allowed by the Celtics this season.

It was all Clippers out of the gate -- they grabbed a 31-17 lead towards the end of the first quarter while the Celtics offense couldn't find the bottom of the net. With the only consistent offensive coming from Kyrie Irving, it seemed he was the answer to keeping the Celtics afloat in the second quarter, which prevented the Clippers from grabbing a big time lead.

Irving poured in 14 points in the second quarter, including seven points in the final two minutes. Boston kicked off the second half with an 8-2 run as Irving carried over his momentum from the first half and into the third quarter.

However, the Celtics had no response for DeAndre Jordan, who seemed to just soar over everyone in the paint -- where he converted loud dunks and got himself to the charity stripe. Jordan was even making his free-throws, it was that kind of night. Through three quarters, he had 24 points and 13 rebounds.

Jordan finished with a career-high 30 points, including 8-of-9 from the free-throw line.

However, Irving was in takeover mode and was far from done. The Celtics rallied behind his 15-point third quarter and headed towards the final frame only down by two.

It felt like it was going to be that kind of night for the All-Star point guard. A night where the Celtics needed him to put them on his back and finish off the Clippers before taking a much-needed break.

But Irving had to cool off before closing out the game, which forced the rest of the guys to fend for themselves while their star took a breather. With Al Horford, Marcus Morris and Terry Rozier leading the charge, they managed to put a small run together.

However, after Lou Williams drained one from deep to pull his team to within one, Stevens couldn't resist, Irving came back into the game with 9:28 left -- earlier than most anticipated. Ironically, the Clippers still went on a 10-2 run before Stevens whistled for a timeout and entered the rest of his starting lineup.

Jordan, who entered Wednesday's game a 64-percent free-throw shooter, wasn't shooting like one from the charity stripe. Stevens attempted the hack-a-Jordan tactic in the third quarter and it failed but that didn't stop him from trying it in the fourth quarter.

After Boston trimmed a seven-point lead down to three and out of a Stevens timeout came another hack-a-Jordan and for the second time it was the same result -- he drained both, extending the Clippers' lead back up to five. From there, Boston gave up 15 points in the final 4:05.

Irving's game-high 33 points on 11-of-21 to go with his 8 assists led the C's. Al Horford chipped in 20 points while Marcus Morris and Terry Rozier each chipped in 13 points off the bench.

The Celtics will take the next nine days off before traveling to Detroit to take on the Pistons next Friday night.

Seven Clippers scored in double figures as Los Angeles shot 50 percent on 44-of-88 shots. They were highly successful in the paint -- where they scored 56 points.