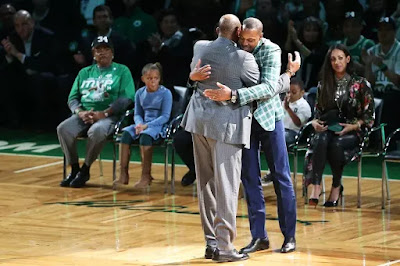 There were plenty of special moments from Paul Pierce Day on Sunday to make a Celtics fan feel nostalgic for the past but one that stood out the most throughout the retirement ceremony was what Doc Rivers had to say.

Rivers, who coached Pierce for nearly a decade (2004-2013) in Boston, touched on the start of their relationship -- one that got off to a rocky one, according to Rivers. While it was well-documented that Pierce and Rivers didn't see eye-to-eye at the start of Rivers' tenure with the Celtics, Doc credited Pierce for being a star player who allowed Rivers to guide him in an era when superstars were reluctant to do so.


"He was a star here when I got here and I decided to challenge him," Rivers explained. "I decided, you know what? For us, Paul has to play a little different and at the beginning part, we bumped heads a couple of times. I don't know if everybody knows but Paul and I were born on the same day so he is stubborn as hell, and you figure I am just as stubborn.

"So we bumped heads a couple of times but at the end of the day, I'm sitting in my office and Paul walks in and says, 'Hey, we're good. We're gonna do this together' and from a coach I thank you because we live in a time now where when a star player will allow a coach to coach him -- that's why you win."

Rivers also reflected on the 'Big 3' era before he shared his favorite memory of Pierce -- a crucial play in Game 7 of the 2008 Eastern Conference semifinals against the Cavaliers that helped seal the win. With one minute left, in a jump-ball play between Celtics forward James Posey and Cavaliers center Zydrunas Ilgauskas, Pierce positioned himself to go after the ball on Cleveland's side, knowing that Ilgauskas would win the tip.

In doing so, Pierce regained possession by diving on the floor for a loose-ball for the Celtics and called a timeout with a three-point lead. It eventually led to the Celtics knocking off LeBron James and the Cavaliers.


"My favorite moment is the jump ball against Cleveland," Rivers said. "Sure, most people think about scoring but we won that Game 7 because of a jump ball. A fundamental play, and Paul is the kind of fundamentals. So, that's my favorite play with him."

For a player who is often pigeonholed as just a scorer, Rivers reminded everyone that Pierce's hustle is what resonated with him more than anything. Clutch was the word he used in describing Pierce towards the beginning of his speech, and although Pierce will always be remembered for hitting clutch shots at the end of games, Rivers will remember the 10-time All-Star for making the gutsy plays that didn't always end with the ball going through the hoop.


"To get recognized that one of the biggest plays was a hustle play, that says a lot," Pierce said. "That just shows you that I wasn't just a scorer.

"I did other things to help my ball club win. I was willing to sacrifice."

Celtics president of basketball operations Danny Ainge shared the exact same moment as his favorite Pierce memory when it was his turn to speak, adding that the Celtics honoree succeeded in other facets of the game while having to guard some of the best players the league has ever seen.


"There's a lot of talk about being the greatest scorer in Celtics history and who that is, but to me (that play is) the meaning to Paul," Ainge said. "Because Paul was way more than a great scorer. He was a great rebounder. He defended the other team's best players often, especially in our championship season. And he was a winner, way more than a scorer, but a winner and a champion."