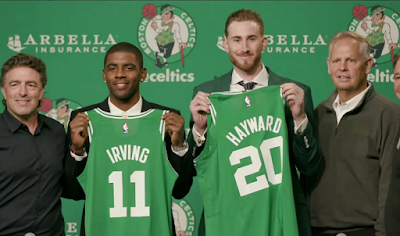 Not too long ago free agents had a tough time buying into whatever the Celtics were selling when it came to possibly luring them to play in the city of Boston.

It looks like those days are gone, or at least for the time being Danny Ainge, as has made an impression around the league the last few years.

According to a recent poll of 48 NBA players conducted by ESPN, where almost every question had to do with the impending free agency of LeBron James, except for one in particular, about which team made the best free agent pitches.

Celtics fans should be happy to know that 27-percent of the those who took the survey choose Boston as the place with the best pitches in free agency.

Tom Brady accompanied the team two summers ago as Ainge and company tried to snag Kevin Durant away from Oklahoma City, but the 2014 league MVP chose Golden State instead.

The Heat (15 percent), Lakers (12), and Warriors (9) followed, along with the Clippers, Grizzlies, Hornets, Knicks, Mavericks, Pacers, Rockets, Spurs, and Wizards also receiving some votes as well.

It doesn't look like this summer the Celtics will spend major dollars after signing Al Horford and Gordon Hayward the last two offseasons, respectively, but it's good to know that Boston is in the back of players' minds these days as a possible destination when it comes to free agency.