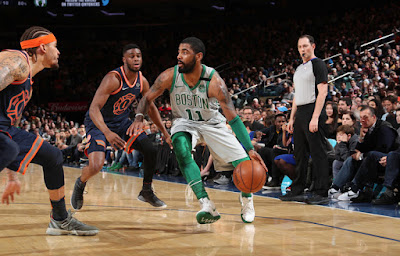 It took nearly four-quarters to put away the Knicks on their home floor, but it was Kyrie Irving who helped lead the charge, as the Celtics won their second straight in a 121-112 victory at Madison Square Garden on Saturday night.

On the second night of a back-to-back, Irving finished with a game-high 31 points to go along with 9 rebounds and 8 assists, using a 15-point third quarter -- including scoring 14 straight, to secure a win against the Knicks on the road.

The Celtics, who snapped a three-game skid since returning from All-Star break, look like they're back on track after six C's players scored in double-figures.


"Certainly we can build off of that but we're not in it for two games, we're in it for the last 23," coach Brad Stevens said. "So we've just got to keep adding to it and building."

Jaylen Brown had 24 points, while Terry Rozier added 14 points and Marcus Smart -- in his second game back, chipped in 11 points with 5 assists off the bench for the Celtics.


"Consistency has been one of the things that people talk about with this team and I just think long season, lot of ups and downs, you've got to go through that if you want to be a good team," Brown said.

Trey Burke scored a team-high 26 points and dished out 8 assists off the bench, while Tim Hardaway Jr. added 17 points and Michael Beasley chipped in 15 points for the Knicks, who are 1-1 since the break.

Despite these two team's last meeting at the TD Garden a few weeks ago, where Boston won easily in a 107-73 blowout and without Irving or Smart in the lineup, this time around it was a see-saw game for almost the full 48-minutes.

The Celtics led by as many as 10 points in the third quarter, only for New York to get within two with with 8:14 left in the final frame.

Irving found his teammates for open shots like Al Horford (3-of-6 from 3 for 13 points and 10 rebounds) throughout the rest of the period to push the Celtics lead back into double-digits.

The All-Star guard also hit a roaming Jaylen Brown along the baseline for a lob connection late in the fourth that got a reaction from the home crowd.


"It's about us right now," Irving said. "That's where that stands. We just want to find that consistency and then keep hammering on it."

After a 2-0 mini road-trip and scoring nearly 116 points per-game, compared to their 103.5 season average, Boston will head back the TD Garden to take on the Memphis Grizzlies Monday night.

Marcus Smart (hand), who missed 11 games,  is averaging 11.5 points, 5.5 assists and 2.5 rebounds in limited minutes since his return on Friday night against the Pistons. Aron Baynes sat out against the Knicks after suffering a left elbow injury in the first three minutes against Detroit. The Celtics center will get an MRI once the team returns to Boston. Shane Larkin made his way back into the Brad Stevens' lineup on Saturday after missing 9 games due to knee soreness.