Paul Pierce reflects on retirement ceremony and seeing No. 34 in the rafters 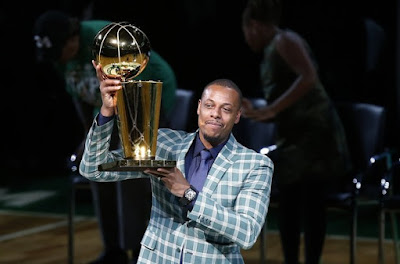 It was an emotional night at TD Garden Sunday evening.

Following the Celtics blowout loss to the Cavaliers, Paul Pierce's No. 34 was lifted into the rafters as his legacy was officially cemented into franchise history as one of the greatest players to ever play for the Celtics.

Surrounded by family, former head coach Doc Rivers, former teammates such as Kevin Garnett, Rajon Rondo and Antoine Walker and Celtics legends like Robert Parish and Satch Sanders, Pierce fought back tears at center court as he reflected on his childhood and his time spent in Boston. The 2008 Finals MVP also addressed the media shortly afterwards, and spoke about what the day truly meant to him.


"When you are forever with the Celtics, you're forever," Pierce said after his retirement ceremony.

"If I never make the Hall of Fame or anything, to go up and make the rafters as a retired number for the Celtic, that's just enough. That's enough for me. Everything else is icing on the cake."

Sandwiched between timeouts, there were video tributes from Lakers legends Magic Johnson and Kobe Bryant -- something that Pierce said caught him by surprise. Pierce helped bring another championship to Boston in 2008, and did it against Bryant -- one of his biggest rivals -- and came close to doing it a second time in 2010.


"I didn't expect that at all, especially coming from rivals and it just helps me realize the impact that I was able to have and the respect that I was given throughout the course of my career," Pierce said. "You've heard Kobe say it, you've heard LeBron say it. I wasn't a flashy player or had the commercials and top-selling shoes, but I was a player that was well-respected, and people know when I came into the gym that they had to be ready also. For them to give the praise they gave that means a lot because Magic Johnson was my idol and Kobe Bryant was my rival. It means a lot."

Pierce joins 21 other retired numbers in Celtics history, including Larry Bird, Kevin McHale, Cedric Maxwell -- who was also in attendance -- as well as Parish and Sanders. He talked about how his emotions got the best of him during the ceremony when he talked about his kids while glancing over at his three kids seated next to his wife, Julie.


"I got emotional when I talked about my kids because for them to just sit here -- they didn't get a chance to see most of my career," Pierce explained. "My daughter was born April of the year we won it, my first daughter, so they didn't really get a chance. For them just to see their dad and how appreciated he was in the city and to be able to leave a legacy to be able to come back years down the line and say, 'That's my dad. My dad's number is up there.' That means a lot to me."

It certainly wasn't the first time a teary eyed Pierce was seen trying to fight back tears. Those emotions got the best of him in 2008 when he helped raise the franchise's 17th banner -- a moment that came to mind when him and his kids raised his No. 34 into the rafters Sunday evening.


"I was thinking about the last time I pulled ropes up there I was tearing up crying and I was trying not to cry," Pierce said with a smile on his face. "When we raised the championship banner, that's when it all came out. It came out bad that day.

"I was just trying to hold it together and I just knew that when I first saw the banner lift and I saw it straight and I saw my number there it was like, man all the years I walked into the gym everyday I looked up and I saw empty spots and I saw all the other jersey numbers. Now, I'm on there, now I'm on there, and that's forever. It's just like, 'Wow I'm there,' and now I can say that's the finish. I left a legacy."