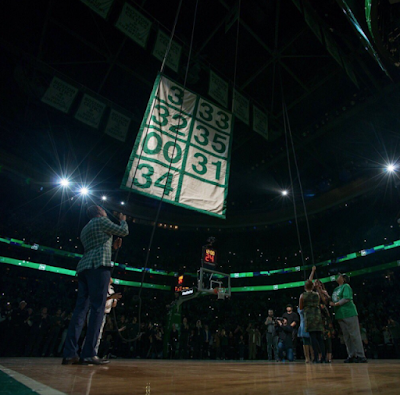 Whether his name ends up enshrined in Springfield or not, Paul Pierce holds Sunday's moment of seeing his No. 34 in the rafters alongside all the other Celtics greats as the biggest accomplishment of his career.

There isn't a shadow of a doubt that Pierce will be a first-ballot honoree when his name is called for the Basketball Hall of Fame. However, Pierce's sentiments towards what it means to have his number cemented into Celtics glory as one of only 23 retirees that hang above the parquet at TD Garden over entering the Hall, embodies just how much Pierce values the franchise he dedicated 15 seasons to.


"If I never make the Hall of Fame or anything, to go up and make the rafters as a retired number for the Celtics that's just enough, that's enough for me," Pierce said. "Everything else is icing on the cake."

Although the thought of raising his number into the rafters crossed his mind, the timing of it is what surprised Pierce the most. He told the story of how he found out when he spoke to reporters from the podium after the ceremony.


"When Wyc (Grousbeck) gave me the call this summer I was on the freeway stuck in traffic and I was like woah," Pierce said. "After I was done like I know it could happen, but it happened so fast and I'm like wow, really? A year after I'm out playing, I'm just like, man. I'm going into the rafters and leaving a legacy, something that is going to be forever. Like I said, when you are forever with the Celtics, you're forever.

"It means so much, it means a lot. I always tell guys with the way the NBA landscape is and how the collective bargaining agreement is and player movement all the time and I had a chance to think about it, my number could be up there without another number going up there for a long time. I think the days that you see a playing playing 10-15 years for one franchise is probably over so that could be really special. Who knows."

Moments before his name was announced at TD Garden, Pierce admitted that he was very nervous. Pierce has been introduced thousands of times in the same building he called home for 15 years, but this time was different.

It was like no other player introduction he'd received before.


"When I was sitting out here in the back ready to go out, I was just sitting here and my hands were shaking," Pierce said at the podium after the retirement ceremony. "Originally, I had a speech, I wrote down some points but then last minute I was just like, I'm going to go out there and say what I feel and hopefully I don't forget important names that were part of this journey. This is just a special day."

As the league's most storied franchise, it's not easy to earn a square in the rafters above the parquet. But there hasn't been another Celtics player in the past two decades who deserves one more than Pierce, who led his team to a championship, earned a Finals MVP and will go down as one of the greatest scorers who ever played in Boston.

What's also noteworthy is the path in which Pierce had to go through to reach the franchise's 17th banner. He went through some of the league's greatest players, went toe-to-toe against future Hall of Famers like Kobe Bryant and LeBron James and at the center of it all when he raised the championship trophy.

The stats speak for themselves, but what also makes Pierce such an icon is how he embraces the Boston culture. For a kid who grew up in Inglewood, Calif. cheering on his idol Magic Johnson and the Lakers, Pierce fell in love with what it meant to be a Celtic along with the sports scene that is often tied in with being a local.

He's an avid Patriots fans, cheers for the Red Sox, enjoys his favorite Italian dishes in the North End and loves a hot bowl of clam chowah (as he would say in his best imitation of the Boston accent). How ironic -- a Lakers fan, turned Celtics icon.

A legend, whose story will live on forever.