Brad Stevens plans to make rotation changes after the break, Kyrie Irving says it's his job to motivate teammates 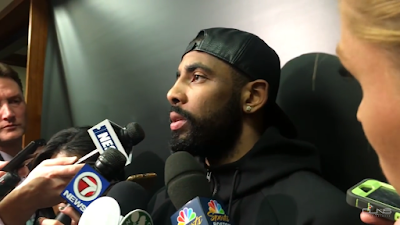 When asked if the All-Star break is coming at a good time for the Celtics, Stevens reminded reporters that every team has been playing games since October 17 and that there are no excuses for being outplayed by opponents.


"I think teams have outplayed us," Stevens stated. "I've said all along I don't think we're all that we were cracked up to be during our 16-game winning streak and it's probably hit us more in the last month than it hit us before. Teams have outplayed us; good teams have out-played us and that was the case again tonight. Couldn't get a stop at any point in time during the game and we are generating good looks the whole game even when we weren't scoring in the first quarter -- just been outplayed."

Stevens recognized the Celtics' 129-119 loss against the Clippers as a precursor to his approach, he talked about using the mid-season break as an opportunity to make changes to his rotations on both ends of the floor in an effort to correct the issues that have plagued the Celtics lately.


"We'll look at everything. Obviously, you're always looking at small tweaks defensively and offensively but we haven't gotten enough out of our defensive rotations and subs and all of those things," Stevens said. "We'll take a deeper dive into that over the next week."

Those changes will probably start on the defensive side of things. At the start of the season, the Celtics emerged as one of the toughest defenses in the league, which propelled them to not only a 16-game winning streak but the best record in the east.

For a team with the best defensive efficiency rating and ranked second in opponents points per game (99.6) behind the Spurs (98.5), it's been a rough month to say the least. Boston has allowed an average of 109.7 points in February, including a whopping 250 points in its last two outings.

What the All-Star point guard is alluding to is the fact that there are only 23 games left of the regular season, and with the Celtics (40-19) now two games behind the Raptors (41-16) in the Eastern Conference. Unlike seasons in the past, the Celtics are far removed from mid-season, and while a nine-day break will help this group before the season's final stretch, it will also give opponents time to regroup and prepare for what's at stake.

If there's one person from this young group that understands how important the fourth quarter of the season is it's Irving, the only member of the Celtics with a championship ring who's coming off of three consecutive finals appearances.


"Going into All-Star break, I'm thinking about what's happening after," Irving explained. "How we respond and what we're doing after and where our focus is and where we are mentally. That'll really be the difference and then the physical -- that can take care of itself with experience. You gotta want it. I know I want that mother-(expletive). Excuse my language.