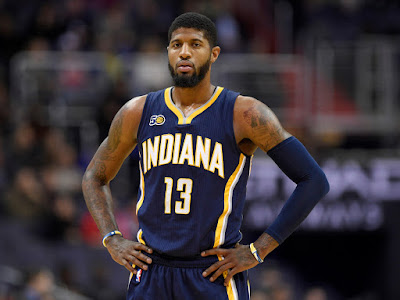 A report by Adam Himmelsbach of the Boston Globe, states that the C's made several offers for George over the last year, which included multiple first-round picks.

According to Himmelsbach, the Celtics were prepared to send over four first-round selections at this year's trade deadline (including the 2017 Nets' pick, which turned into the No. 1 overall) to the Pacers. It was believed that the potential of two playoff runs would convince Paul George to sign an extension to remain in Boston long-term during the summer of 2018.

Obviously the deal fell through, but both parties resumed trade talks once again prior to the NBA Draft a few weeks ago. A source told the Globe the Celtics package now included three starters and two first-round picks (excluding the Nets' 2018 selection or the Lakers-Kings pick they received from the 76ers for the top overall pick) to Indiana, but they turned it down.

ESPN's Adrian Wojnarowski, reported that the Pacers choosing the inferior deal from the Thunder, all came down to timing. According to Woj, Indiana wanted Marcus Smart, Jae Crowder and multiple first-round picks from the Celtics, but Danny Ainge was not ready to accept the trade before meeting with Gordon Hayward, who plans to visit Boston on Sunday.

Based on both reports, Indiana simply settled for less from the Thunder despite waiting for a deal that would have given them a lot more from Boston. Jeff Goodman, of ESPN says executives around the NBA believe that Pacers president of basketball operations Kevin Pritchard just wanted George out of the Eastern Conference.

Now the league MVP; Russell Westbrook will have a legit running mate out west again, while the Celtics over the last eight days have watched three potential targets get traded (George and Jimmy Butler) or re-signed (Blake Griffin with the Clippers).

The pressure is on for Danny Ainge to sign Hayward and if he were to come up empty-handed during free agency, Celtics fans will be stuck wondering why?