Report: Celtics could make a run at Anthony Davis 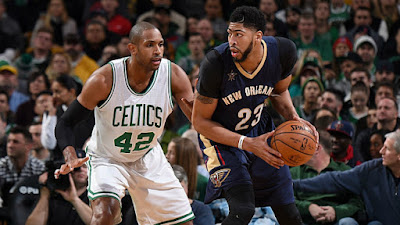 While the Celtics looked to be done with their 15-man roster with the signing of their 2017 second-round pick (37th overall), forward Semi Ojeleye, Danny Ainge could be keeping his eyes on New Orleans big man Anthony Davis throughout the first half of the 2017-18 season.

According to Chris Mannix of The Vertical, the Celtics could emerge as a top team to land Anthony Davis if the partnership with DeMarcus Cousins does not work out with the Pelicans as expected.

The report states that league executives believe the Celtics are paying close attention to the situation in New Orleans and will make a "strong run" in a blockbuster deal via trade for Davis if he becomes available.


"It figures to be an interesting season in Boston," said Mannix. "The addition of Gordon Hayward fortified a top-seeded roster, while dismal seasons by the Nets and Lakers will help the Celtics continue to build for the future. In addition, rival executives expect Boston to be keeping close tabs on New Orleans, which is entering a critical season." [The Vertical]

On Monday, Senior NBA Writer of the Bleacher Report; Howard Beck, joined Mannix on The Vertical Podcast to discuss the somewhat disfunction of the Pelicans and the position Boston is in for a possible Davis-to-the-Celtics scenario


"Boston's sort of lurking out there," Mannix said. "Boston, which still has infinite assets. They still are rich in these draft picks and young players...Is there any scenario where you would explore trading Anthony Davis?" he asked Beck.

"From the moment they acquired DeMarcus Cousins [last season], my thought process went something like this: This isn't going to work," said Beck. "DeMarcus is going to leave after one year. Everybody is going to get fired. The Pelicans are going to end up in Seattle. Anthony Davis is going to demand a trade."

"It's not that far-fetched," Beck added of New Orleans parting with Davis. "They did nothing [in the offseason]. They've added no one of consequence. I don't get any part of this." [The Vertical]

The additions of Gordon Hayward, and Jason Tatum to help out Isaiah Thomas and Al Horford makes the Celtics one of the elite teams, especially in a weak Eastern Conferance, but it's not enough to compete with the Golden State Warriors for a championship in this current 'super-team' era.

Davis, who averaged 28 points and 12 rebounds while shooting 50-percent from the field last season, could prove to be the difference maker and the final piece for the Celtics to not only dethrone LeBron James in the East but challenge the league champs out in Bay Area.

Clearly, all this Davis-to-Boston talk could be just noise, since the All-Star is signed through the 2020-21 season, making a trade that more difficult, or the Pelicans could at the very least listen to an offer from 'Trader Danny.'

But, who knows? Since Ainge could very well put together the best trade package the NBA has seen "in decades" if you believe what Beck has to say


"It's reasonable to think that he will want out and that his people will start pressing to get him out," Beck said. "If you're the Boston Celtics and you're still sitting on that cache of picks and players, you are sitting so perfectly to make that kind of deal. Arguably, given Anthony Davis' talent and his age, this should be the best package we've seen in, I don't know, decades. It should be the kind of package that blows you away. The kind of package people thought they wanted to see Boston do for Paul George or Jimmy Butler.

"That may be the kind of package we see for Anthony Davis. And if the Celtics pull it off, all the people who were throwing tomatoes at Danny Ainge for not making deals are going to be thinking about him much differently." [The Vertical]