Isaiah Thomas on his next contract: "I'm a max guy" 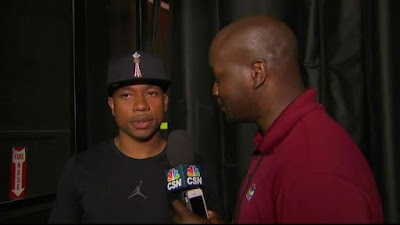 Isaiah Thomas has reminded the Celtics that his time to finally get paid, is coming and fast.

With the addition of Gordon Hayward and the subtraction of Avery Bradley this week, Thomas has made it clear that when his contract expires next summer, he expects to make max money.

Thomas, who was in Las Vegas checking out NBA Summer League, ran into A. Sherrod Blakely of Comcast SportsNet New England and the two spoke about how well stars around the league have been getting paid since the beginning of Free Agency. Of course, the question was asked on what Thomas thought how much he should be paid come next July.


"I'm a max guy," Thomas told CSNNE. "I deserve the max and we're just going to continue to take care of business on the court and let the cards fall where they may. I'm happy for all the guards and all the other guys getting their money, because they deserve it. But my time is coming. They know they've got to bring the Brinks truck out. They know that." [CSNNE.com]

Kyle Lowry (Toronto) re-signed with the Raptors at 3-years, $100 million. Jrue Holiday (New Orleans) re-upped with the Pelicans, receiving $126 million for 5-years and Hayward (Boston) is set to make $128 million for the next four years.

Thomas is in the last year of his current deal worth $6.2 million after averaging a 28.9 points, shooting 46.3 percent (both career-highs), 6 assists, while finishing fifth in the MVP voting in 2016-17.

If the Celtics don't offer him a max deal, Thomas will get it from somewhere else, especially if he has similar numbers this season and is healthy from his hip injury that ended his playoff run prematurely last spring.


"I'm feeling better," Thomas said. "I'm taking steps toward my goal and that's getting back on the court. I haven't been able to play basketball yet, but I'm getting a lot better." [CSNNE.com]

The Celtics All-Star was also asked to reflect on the trade of his good friend and former teammate Avery Bradley and his thoughts going forward.


"That's one of my best friends, someone I grew up with," Thomas said. "It hurt, but that's the business of the game. I wish him well. I know he's going to do great things in Detroit, it definitely hurt to see him have to go, but there's decisions that have to be made." [CSNNE.com]

Finally the Celtics leading scorer commented on how the arrival of Gordon Hayward and how he will benefit the C's.


"[Hayward] is another star we needed, he's someone that's going to help our team right off the bat," said Thomas. "Someone that can hopefully get us over the hump and get us to the NBA Finals and compete for a championship."

On the issues between Hayward and Jae Crowder, Thomas only added: "We're trying to win a championship, we put all that aside...it all goes out the window once you're teammates." [CSNNE.com]