Isaiah Thomas will not need hip-surgery 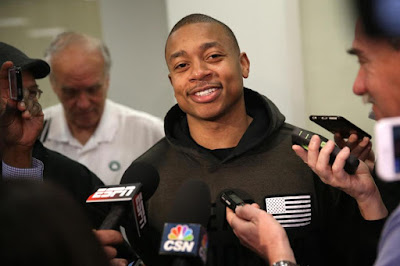 Isaiah Thomas will not need hip surgery, according to Danny Ainge. On Wednesday the Celtics president of basketball operations said that his point guard has resumed light on-court workout and has increased his cardiovascular training off the court.

Thomas, who first injured his hip during a game back in March against the Timberwolves (missed the next two-games), re-aggravated the injury during Game 6 of the Eastern Conferance Semi-Finals, only to be in extreme pain during Game 2 of the Eastern Conferance Finals a week later and be ruled out for the remainder of that series against the Cavaliers.

The Celtics All-Star has officially ruled out the need for possible surgery and should be ready in time for training camp.

“Isaiah is making good progress,” Ainge said. “He’s out on the court; he’s shooting. He’s full-speed ahead on the stationary bike and working in the swimming pool. He’s progressing nicely.” [Boston Globe]

Thomas was evaluated by many specialists for weeks, while the Celtics declared that no course of action was decided yet due to the waiting of the swelling to subside.

It was announced last week that Ainge had signed veteran point-guard Shane Larkin to a one-year deal, that some called an 'insurance policy,' in case Thomas would not return before the start of the regular season.


“This in and of itself is just an opportunity to take a look at a really terrific player on a good contract for us to get a chance to see,” Ainge said. [Boston Globe]