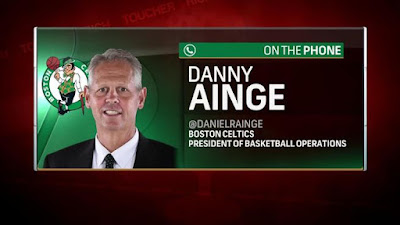 Just when you thought the 2017 NBA offseason was quietly fading away into the night, news that Kyrie Irving had requested a trade out of Cleveland on Friday dropped like a bomb that could shake up the landscape of the Eastern Conferance.

While there's been plenty of speculation into why, few, if anyone, may actually know the plethora of reasons behind the All-Star's demand.

Reports have varied over the last 72-hours of Irving's unhappiness playing alongside LeBron James, to wanting a bigger role or even not wanting to stick around before James decides if he will be taking his talents elsewhere next July.

The Cavaliers have yet to comment or officially make Irving 'available' but they are definitely teams showing interest. According to ESPN, one of those teams are the Celtics, who have made an "obligatory call"


"Most teams, including the asset-rich Celtics, have placed the obligatory call letting Cleveland know they would like to be kept in the loop, sources say," Zach Lowe wrote. "Boston could offer Isaiah Thomas, Jae Crowder and one of their golden picks -- Brooklyn's pick next season, or the Lakers/Kings pick they got from Philly in the Markelle Fultz deal." [ESPN]

Despite the call being made, the likelihood of a deal actually happening is on the slim side, especially since the Celtics already have an assassin shooter and an excellent finisher around the rim in Isaiah Thomas. But the question is; could they use a 25-year-old, 6-foot-3 killer with championship experience on a two year contract (worth around $38.9 million) in Kyrie Irving instead?

Thomas, 28, is on the last year of his current contract ($6.2 million) and is due for a max-deal raise next summer. Would acquiring Irving for Thomas and others now, make the Celtics more competitive against the NBA champs Golden State Warriors?

With stats that favor both players, in reality the Celtics would have to give up a lot more than just Thomas for Irving straight up, just to match salary.

But then again, let's be honest, it's hard to fathom the fact the Celtics and Cavaliers become trade partners if either team didn't believe they could potentially beat the Warriors, at least on paper.