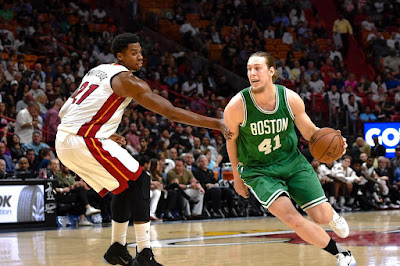 "The Is Bounce Real" for those who don't know about a certain Celtics Twitter hashtag and now so is Kelly Olynyk's pay increase.

The Celtics unrestricted free agent is taking his talents down to South Beach. It didn't take long for the 26-year-old to choose a city he liked as Olynyk will now get his payday, according to his agent Greg Lawrence, who told ESPN that his client has agreed to a 4-year, $50 million deal with the Miami Heat.

Olynyk averaged 9 points, 4.8 rebounds and 20.5 minutes this past season. He finished with a career-high in games payed (75) and field-goal percentage (51.2%) in 2016-17. He'll always be remembered for his performance in Game 7 of the East Semi-Finals against the Wizards, where Olynyk scored a career-high 26 points (regular season or playoffs) on 10-of-13 shooting to help the Celtics advance to the Conferance Finals this past postseason.

The seven-foot Olynyk was traded to the Celtics from the Dallas Mavericks on draft night back in 2013 and averaged 9.5 points (37 percent from behind the arc), 4.7 rebounds per game in his four seasons in Boston.

The Celtics renounced their qualifying offer to Olynyk after coming to terms with Gordon Hayward on a four-year deal worth $128 million, while the Heat took advantage of the Canadian's free agent status immediately after striking out on the former Jazz swingman.