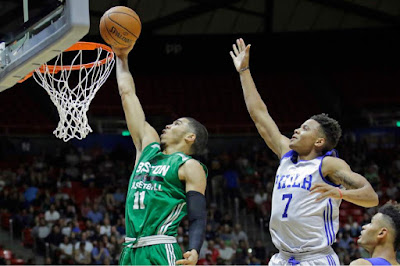 For the first time since his high school days, Jaylen Brown scored 29 points in a game -- which led all scorers in the Celtics' first game of the Utah Summer League -- but it was Jayson Tatum's go-ahead jump shot with 5.7 seconds left that propelled the Celtics to an 89-88 victory.

After Boston's draft night trade with Philadelphia, all eyes were focused on Markelle Fultz -- who could have been the Celtics' first overall pick, face off against Tatum -- who the Celtics say they were most impressed and why Boston traded down to No. 3 to get him.

Tatum finished with 21 points, 7 steals and three assists, including the game-winner. Fultz scored a team-high 17 points for the 76ers. He had a chance to win the game after Tatum's jumper but his reverse layup fell short and was partially blocked by Brown as time expired.

In a game that came down to the wire, the two top-3 draftees were impressive -- showcasing their scoring capabilities throughout the night. Fultz got to his spots, draining contested jump shots from inside and outside the arc, including a pair of 3-pointers and Tatum flashed his scoring arsenal via off-the-dribble moves towards the hoop and jumpers from the perimeter.

But it was the Celtics' 2016 No. 3 pick -- Brown -- who was a cut above the rest. He scored 17 first-half points on his way to 29 on 10-of-16 attempts, including 3-of-4 from deep. Brown was getting to the rim with ease, running out in front of the pack in fast break opportunities and draining outside contested looks.

2017's D-League MVP Abdel Nader had a solid outing, finishing with 13 points, 7 rebounds in 29 minutes. Most of his shots came from in and out of the paint.

While Ante Zizic put together a decent performance. The Celtics big man scored all three of his field goals in the key and shot 50 percent from the free-throw line -- where he went 3-of-6 and pulled down 5 rebounds in 19 minutes. But what appeared to be Zizic's most glaring weakness is his ability to keep up with the pace of the NBA.

Off missed shots, he had a tough time getting back on defense and looked gassed when the game sped up in the second half. The Celtics fell behind by double figures after halftime before Brown and Tatum led a second-half Celtics run to tie the game, and with Tatum's jumper, eventually pulled ahead.

The Celtics will continue their Utah Summer League schedule on Wednesday when they take on the Spurs.