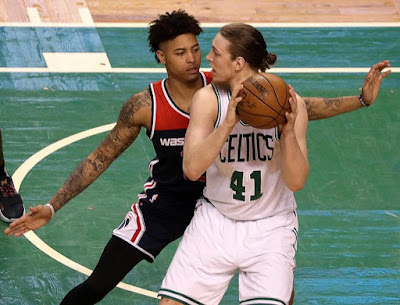 Just when you thought the Celtics were going to say goodbye to Kelly Olynyk, they went and made the seven-footer a qualifying offer.

According to Steve Bulpett of the Boston Herald, Danny Ainge will make Olynyk a restricted free-agent ahead of the qualifying offer deadline at midnight. Boston will retain the right of first refusal if another team signs the Canadian big man to an offer sheet.

With this qualifying offer ($4.1 million), there's no guarantee Olynyk, who made $3 million this past season, will return to the Celtics for a fifth year, as the C's can renounce their offer just like they did a year ago with Jared Sullinger.

The Vertical reported earlier this week, that Olynyk's days as a Celtic were more than likely done to create more cap space. Olynyk's offer would count for $7.7 million against the cap next season if he remains on the roster. The Celtics will need all the cap room they can get, especially if they want to sign Gordon Hayward (who they'll meet with this weekend) and acquire Paul George (via a rumored trade).

It seems like Ainge is leaving his cards out on the table to view all options once free agency hits.


"I feel like Kelly has improved every year," said Ainge. "I think he's got his best basketball ahead of him." [Boston Herald]

Olynyk, 26, finished his 2016-17 campaign averaging 9.0 points (shooting a career-high 51.2 percent from the field), 4.8 rebounds and 2.0 assists in 75 games. His highlight of the season came in Game 7 of the Eastern Conference Semi-Finals against the Wizards when Olynyk scored 26 points on 10-14 shooting off the bench.

The Celtics selected Kelly Olynyk with the No. 13 overall pick back in 2013.