Wojnarowski: Celtics have yet to make an offer to Cleveland for Kyrie Irving 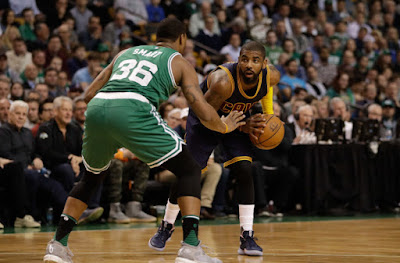 As the Kyrie Irving and LeBron James saga continues in Cleveland, teams around the NBA have reportedly continued to inquire about a possible trade for the Cavaliers four-time All-Star point guard.

'The most unique player to reach the trade market in years," according to Adrian Wojnarowski, has drawn interest from about 20 teams, including the Celtics. Despite the well documented 'obligatory phone call' made by Danny Ainge just days after news broke of Irving's trade request, it still remains to be seen if the C's have made an offer to the Cavaliers yet.


"The Celtics are monitoring, but it's unclear how aggressive they'll get -- and how motivated the Cavaliers would be to make a deal with their fiercest conference rival," said Wojnarowski in his recent report. [ESPN]

Woj also sates that Boston and the Phoenix Suns are the only two teams with the best assets that the Cavaliers are looking for in a possible deal for Irving.

So far Koby Altman, the Cavaliers' new general manager, has only received "scaled-down" Timberwolves-Bulls, Jimmy Butler type returns when it comes to the latest trade discussions with suitors for Irving.

Teams that have made an offer to Cleveland, according to league sources include: The New York Knicks, Miami Heat, San Antonio Spurs, Los Angeles Clippers, Minnesota Timberwolves and the Phoenix Suns, who also refuse to part with the No. 4 overall pick in last month's draft, Josh Jackson.

While Altman and Cavaliers owner Dan Gilbert continue to downplay any animosity between Kyrie Irving and LeBron James, one could argue if Cleveland pulled off a proposed three-team deal with the Denver Nuggets and Indiana Pacers for Paul George back in June, that included shipping away Kevin Love, we're possibly not talking about Irving wanting out Cleveland right now.

According to Woj's report, that three-team deal fell apart due to the Pacers wanting a unprotected future first-round draft pick in return from the Cavaliers, which they refused to give up, thus Indiana opting to trade with Oklahoma City for Victor Oladipo and Domantas Sabonis instead.

The irony of that trade proposal between the Cavaliers, Pacers and Nuggets didn't happened simply due to Cleveland insisting their future first round pick going to Indiana have some sort of protection.

Since the 2013 Celtics offseason trade that sent Paul Pierce and Kevin Garnett to Brooklyn for several unprotected future first round picks in return, clearly teams around the league have learned to not jump so high on those types of deals (thanks to Ainge's brilliance), but the Cavaliers might be kicking themselves for balking on such a minor detail for a player like Paul George, considering they're almost going to have to move Irving at some point.

For now, if the Celtics are truly interested in making a move for Irving, who has two years left on his current contract, the Cavaliers have leverage to ask for a hefty return. But how much is too much for a team who wants to win both now and for years to come?