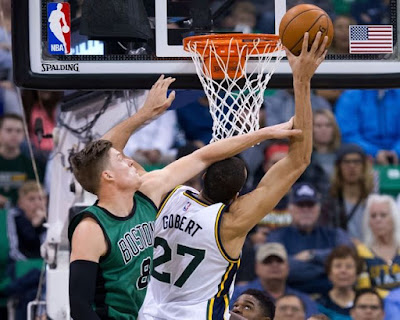 Then there were eight.

Jonas Jerebko becomes the latest 'former' Celtic from the 2016-17 roster that reached the Eastern Conferance Finals, to find a new home. The 6-foot-10 forward has signed a 2-year, $8.2 million deal with the Utah Jazz, according to ESPN's Adrian Wojanarowski.


The Swedish fan favorite averaged 3.8 points, while shooting 43.5 percent from the field (34-percent from 3) and 3.5 rebounds in 78 games (6 starts) for the Celtics last season.

Jerebko was originally acquired in a deal from the Detroit Pistons for Tayshaun Prince (Celtics landed in Jeff Green trade to Memphis) back at the NBA trade deadline in 2015. He was known as a very crafty stretch four, who shot the ball well from behind the arc, hitting 114-of-302 three-pointers attempted over his two-and-a-half years in Celtics green.

The 30-year old will be remembered as a player who seemed to come up big whenever called upon. Who could forget Brad Stevens inserting the veteran into the starting lineup during the 2016 playoffs against the Hawks, with the Celtics down 2-0? Jerebko not only came through in the clutch, but he also notched back-to-back double-doubles in Game 3 (11 points, 12 rebounds) and Game 4 (16 points, 10 rebounds) to help even the series 2-2 before the C's loss in six.

Unfortunately, with the arrival of Gordon Hayward and his max deal and the signing of big man; Aron Baynes, Jerebko is now the third Celtic free agent to sign with a new team, along with Amir Johnson (to the 76ers on a 1-year, $11 million contract) and Kelly Olynyk (to the Heat for 4-years, $50 million) as a result of Danny Ainge needing cap space.

Avery Bradley, the longest tenured Celtic was dealt to the Pistons for Marcus Morris last week in a cap clearing move as well.

Jerebko averaged 4.6 points and 3.8 rebounds in 185 total games with the Celtics.