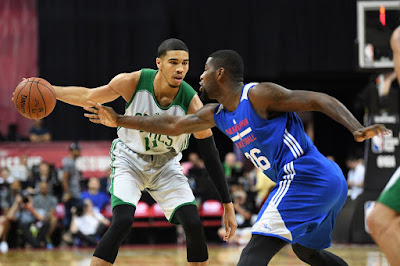 Jayson Tatum turned in yet another impressive performance Tuesday night against the 76ers, while him, Demetrius Jackson and Jabari Bird led the Celtics to a narrowed victory.

With an 88-83 win over the 76ers, the Celtics swept their three-game Las Vegas schedule and have earned themselves a first-round BYE in the Summer League playoffs. While we didn't get to see Part 2 of Tatum vs Markelle Fultz, due to Fultz' summer-ending ankle sprain, we instead saw other members of the Celfics team step up alongside Boston's first-round pick.

Tatum displayed a vast array of offensive moves and turned in 15 points to go with his 6 rebounds.

He was effective in many ways on offense. Whether it was a crossover move against a big for a contested jumper, snaking through defenders to get to the rim untouched or getting himself to the free-throw line, Tatum proved to be the best scorer on the court.

But when the 76ers adjusted their defense into trapping him via double-teaming and at some points triple-team coverage, it led to missed shots and three turnovers by the league's third overall pick. Philly capitalized specifically after halftime, when they finished the third quarter with a 22-7 run to grab their biggest lead of the night (66-59).

However, Tatum adjusted in the final frame by creating open looks for himself away from the ball. He did an excellent job of reading the 76ers' defense for easy shots and found a cutting Demetrius Jackson down the stretch for a critical layup that gave the C's the lead for good under two minutes to go.

After Jackson's go-ahead layup, Tatum made the 76ers pay when they failed to rotate after he caught the ball at the right elbow of the top of the key and blew past his defender for an easy layup.

Tatum with a strong late take to rim to put Celtics up 4 after catching Sixers out of position on rotations. pic.twitter.com/xIR5v2LBbU
— Brian Robb (@CelticsHub) July 12, 2017

In what was easily his best outing of the summer, Jackson caught fire in the fourth quarter -- where he scored all of his 14 points, including 2-of-2 from deep. Same can be said about second-round pick Jabari Bird, who posted 15 points, 8 rebounds.

Bird got things going in the first half, scoring 10 of his 15 points from the mid-range and with flashy moves to the rim, while Ante Zizic showed progress in keeping up with the Celtics' uptempo style of play. Zizic looked more comfortable in getting up and down the floor and showed off his rebounding abilities by pulling down 13 boards, including four offensive rebounds to go with his 12 points in 17 minutes.

His post moves are still shaky to say the least. Zizic committed one-fourth (5) of the Celtics' whopping total of 20 turnovers (76ers finished with only seven) but strong picks and knack for yanking down boards was certainly highlighted by his play on Tuesday.

Jaylen Brown got off to a hot start in the first half (7 points, 5 rebounds, 2 blocks) but left the game after clocking in 13 minutes due to a thigh bruise he suffered in the second quarter.

The first-round of the Summer League playoffs kicks on Wednesday, when the Celtics will find out who their opponent will be in round two.