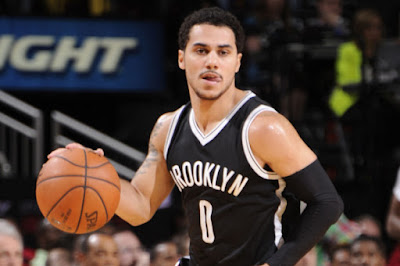 Larkin, who was drafted 18th overall in 2013, is attempting an NBA comeback after spending last season playing for Spanish club Baskonia of the Liga ACB. The point guard last played in the states during the 2015-16 campaign with the Brooklyn Nets following a year with the New York Knicks (2014-15) and the Dallas Mavericks (2013-14) before that.

Basketball insider David Pick, reported that Larkin agreed to a deal with the Celtics, leaving approximately $6.3 million on the table to stay in Europe.

The signing of Larkin either adds to the depth chart of primary ball-handlers in Isaiah Thomas, Marcus Smart and Terry Rozier or his contract could be used in trade later down the line, as you never know with Ainge.

In a text message to Hoops Hype's Alex Kennedy, Larkin confirmed the report and expressed how he's "extremely excited to join the Boston Celtics."


Shane Larkin confirms that he has joined the Boston Celtics on a one-year deal. He explained his decision via text message: pic.twitter.com/25u58amO7u
— Alex Kennedy (@AlexKennedyNBA) July 20, 2017


The Celtics also announced the signing of 2016 first-round pick Guerschon Yabusele, who played with the Shanghai Sharks of the Chinese Basketball Association and the Maine Red Claws of the G-League last season, and 6-foot-9 Daniel Theis, who last played for Brose Bamberg of the EuroLeague.