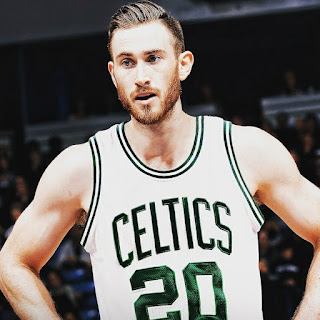 It only took 10 days, but the Celtics have finally announced the signing of their top free agent target Gordon Hayward on Friday afternoon.

Though Hayward and the Celtics agreed upon a 4-year, $128 million deal back on July 4, Danny Ainge had to clear some cap room over the last week in a half to make space for the signing.

Such moves included renouncing the rights to free agents (Kelly Olynyk & Jonas Jerebko), trading Avery Bradley to the Pistons for Marcus Morris and placing Jordan Mickey on waivers for the final cap-clearing move early Friday morning before Ainge and the Celtics could make the signing of Hayward official.


In a press conferance at the C's practice facility in Waltham, Ainge described the process as 'pins and needles' and was concerned when ESPN's initial report that Hayward had chosen the Celtics, was shot down immediately by his agent Mark Bartelstein on the afternoon of July fourth.

Ultimately, what gave the Celtics the edge over the Jazz and Heat was Hayward's relationship with Brad Stevens, who coached the swingman at Butler. Despite being rumored to be a huge factor, one that could be seen as overblown at times, the connection between Stevens and Hayward proved to be key.


“My feelings were it could be a benefit, it could hurt us, too, with the fact that they had such a strong bond years ago that you might not want to jeopardize that with the stress and pressures of a completely different circumstance,” Ainge said of Stevens’ influence in meetings. “I know that Brad is a big part of why we’re able to be in the home of Al Horford, Kevin Durant, and Gordon Hayward over the last two seasons.”

On July 2, the Celtics brass impressed Hayward, as the free agent was blown away with his meeting with Stevens, especially how the forward would fit into the C's plans this season and beyond.

Hayward, 27, averaged 21.9 points, and 5.4 rebounds per game last season and with the deal being the max the Celtics could offer, there will be some high expectations for the 2017-18 campaign.


“I think that expectations come with high salaries in sports traditionally, and I think there’s lot of people that are still living in that world. I think that when you are able to acquire players without having to give up assets, you’re certainly willing to pay them more money,” Ainge said of Hayward’s deal. “We feel very fortunate to have acquired Al Horford and Gordon Hayward with money, and an opportunity to win and play as opposed to having to give up multiple draft picks and potential young stars.”

Ainge also added: "I like high expectations," with a grin.

Gordon Hayward, who will wear No. 20, was not present at Friday's presser in Waltham, but opened up about his fourth of July decision and his letter to the Utah Jazz in The Player's Tribune, via a conferance call late Friday afternoon.


“That was definitely a hectic day,” he said on a conference call. “My mind was just in all kinds of different places that day. I think it’s definitely fair to say that I was leaning towards Boston, but at the same time, we hadn’t figured it out, and I was going back and forth with Mark, and we were really discussing throughout the day different reasons why or why not I should go to a different place.

I was literally on the phone with mark when the story broke online, and I’m looking at my phone, I’m getting blown up saying I’ve decided to become a Boston Celtic, and as everybody knows, it was all over the internet.

At that point in time we decided, look, we have to step away from this. I was pretty upset that that had happened. I didn’t feel like I was ready to say, ‘Yes, I want to be a Boston Celtic,’ so I had to take a step back and regroup and I think we talked about it more and more, then finally we put out the article, but I know there was a lot of reports with people saying we were finishing up the article for the Tribune, which is just completely false.

I had a ghostwriter that I was talking with throughout the course of my visits, and I was sharing my thoughts the whole time. It was one of those things where once I made a decision, it was like five minutes [to] finish up and we were ready to go.

I’m kind of bummed how it happened, but in this day and age, that kind of stuff goes on and there’s not much you can do about it.” [CSNNE]

ESPN's Chris Haynes first broke the news of Hayward's announcement that he intended to chose Boston on the morning of July 4, only for conflicting reports of his decision were to be put on hold until the Jazz were informed of the free agent's pending move.

Reports of Hayward's decision to join the Celtics were made official about five hours later.