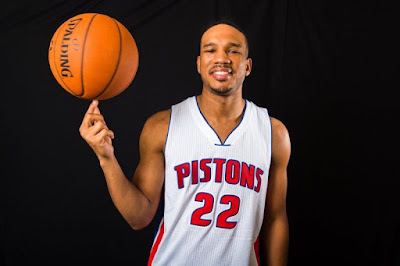 If you needed another reminder about the many changes of players' uniforms before this upcoming NBA season, Avery Bradley is no longer a Boston Celtic but rather the latest acquisition made by the Detroit Pistons.

Bradley, formerly the longest tenured member of the C's and the last link to the latest edition of the 'Big-3' era, was traded for forward Marcus Morris last week. After seven seasons in Boston, the All-NBA defensive guard from a season ago, was introduced to the Detroit media on Thursday.

The Pistons made the introductory press conference short and sweet as Bradley had to return home, as his wife is expecting their third child any day now.


"I'm gonna leave everything out on the floor. We want to bring a championship back to Detroit." --Avery
— Detroit Pistons (@DetroitPistons) July 13, 2017

Stan Van Gundy and the Pistons introducing Avery Bradley now: "Avery's been one of the best two-way guards in this league."
— Jay King (@ByJayKing) July 13, 2017

#Pistons Bradley said he wasn't disappointed about being traded from #Celtics: "Everything happens for a reason."
— Rod Beard (@detnewsRodBeard) July 13, 2017


Bradley, who will wear No. 22 (says he let his wife pick his jersey number), wants to be a leader in the Pistons locker-room just as Paul Pierce and Kevin Garnett were to him in his first three seasons in Boston


"Those guys really helped me be a professional basketball player on and off the court," Bradley said. "And I want to do the same thing here from Day 1. I want to let people know you have to build (successful habits)." [MassLive.com]

Despite the decision by Danny Ainge to move Bradley being a business move rather than a basketball one, most can't not help but think that the Celtics will miss the player and person fans in Boston grew to love.


"Avery's been a huge part of us and one of the tough things about the business, is change," said coach Brad Stevens. "As I've told him, I'm really thankful to have gotten a chance to work together for the last four years. I think really high of him. He's a young guy. He's got a great career ahead of him and I'm certain he's going to have a great run in Detroit. He's an outstanding player." [Boston Globe]

Bradley is on the last year of his $36 million contract he signed with the Celtics in the summer of 2014. While the two-guard is set to make only $8.8 million this season, it's been reported that Ainge wouldn't be able to re-sign both Bradley and Isaiah Thomas (will make $6.2 million in 2017-18) next offseason, especially if both are looking for max type deals.

Avery Bradley was selected 19th overall back in the 2010 NBA Draft, he averaged 12.1 points, 3.1 rebounds and 1.1 steals per game with the Celtics in all seven of years of his professional career.