Celtics to play the waiting game with Gordon Hayward 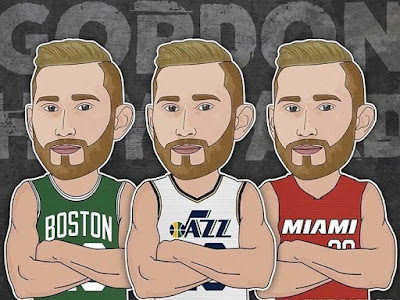 While optimistic Celtics fans get ready for the start of summer league tonight in Salt Lake City against Markelle Fultz and the 76ers, the realistic and pessimistic ones in Boston are prepared to hear what ever decision Gordon Hayward has decided to make regarding his future.

The Celtics with Danny Ainge, Brad Stevens, Isaiah Thomas and Al Horford spent their Sunday touring the city of Boston as part of their pitch to free agent Gordon Hayward.

It began with Stevens meeting the Haywards at Logan Airport on Saturday night after their visit to Miami, while Thomas, Rudy Golbert and Hassan Whiteside engaged in a Twitter, emoji war on who the coveted free agent should choose.

Sunday's plans kicked-off with a trip to Fenway Park at around 10 AM, as a message on the jumbotron welcomed Gordon and his wife Robyn, followed by a video that showed key Celtics moments with Paul Pierce, Kevin Garnett and Isaiah Thomas. Even players like Kobe Bryant and LeBron James were featured talking about how passionate Boston fans are. The montage concluded with a special message from Red Sox legend David Ortiz.

According to sources, Celtics brass and the Haywards met behind close doors for several hours after their special tour, and the 6-foot-8 swingman was 'wowed'' by Boston's presentation.

For now all anyone can do is wait and hope Hayward announces his decision sooner rather than later. But in the meantime, who's excited about watching Jason Tatum and Ante Zizic?