Aron Baynes took less money to sign with Celtics for an increased role: 'I'm always trying to expand my game' 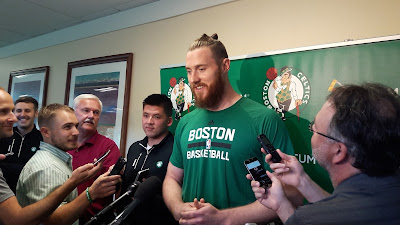 For Aron Baynes, this summer wasn't about signing with the team that was willing to pay him the most, he wanted an opportunity to earn an increased role -- one that he wasn't going to find in Detroit.

Baynes, who declined a $6.5 million player option with the Pistons before hitting free agency and signing a one-year, $4.3 million deal with the Celtics, was introduced to the media on Tuesday at the Celtics practice facility in Waltham. The Australian big man says he was not only impressed with what the Celtics brass put together in the past two seasons -- a top notch team in the east -- but took less money for a chance to add a much-needed piece in the front court.


"This was first and foremost a basketball decision," Baynes said. "From the top down and Brad [Stevens has] done a great job and Danny [has] done a great job of getting the right people here. And hopefully I'm a piece that helps bring their puzzle together. So I'm looking forward to it, yeah, and just ready to get out there guns blazing."

After losing Kelly Olynyk and Amir Johnson to free agency, Baynes is certainly in the right place for valuable minutes up front. He said a shot at earning minutes with the Celtics definitely played a part in his decision to come to Boston due to the lack of opportunity behind Pistons center Andre Drummond.


"I definitely think being in the NBA, everyone always wants to play more," Baynes said. "I think if you don't want to play more than you're not in the right spot. So yeah, I'm excited for the opportunity. And hopefully I can go out there and earn some minutes. We'll see if what I bring is what Brad wants. I'm hoping it is and I'm looking forward to it.

"I'd say that was definitely a part of (leaving Detroit)," Baynes explained. "Like I said, you almost want to be able to play more. I didn't see myself having much more of a bigger role than what I'd had over the last couple of years. So I'm always trying to expand my game in terms of what I can do on the floor. And with opportunity comes the ability to do that. So yeah, that's definitely a part of it for sure."

Baynes, who recently posted a selfie of himself in the city, is already getting familiar with Boston and its restaurants. Although he hasn't found any good BBQ hangouts (first tweet he posted minutes after the signing was announced), he's already mow downed a handful of lobster rolls while exploring the downtown area with his family.

To commemorate the birth of his son, who was born on August 23 of 2015, Baynes will be donning No. 46 next season. He came up with the idea after adding the numbers eight (for August), 23 and 15. It will be the first time in Celtics history a player has worn No. 46.