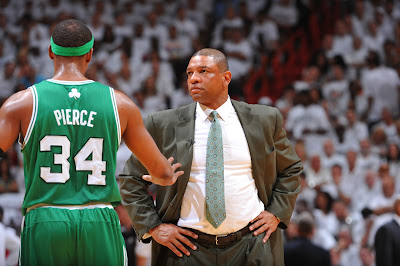 It's been nearly a decade since the Celtics raised their 17th banner to the TD Garden rafters and while it's only been a short four years that Doc Rivers was last on the C's bench, the subject is always worth reminiscing about.

In an interview with The Undefeated, the former Celtics head coach was asked about the 2008 championship team and the 2010 NBA Finals run that concluded with a Game 7 loss to the rival Lakers.


"If I learned anything in Boston it is that winning is hard. It’s hard," Rivers recalls. [The Undefeated]

Rivers, who now wears two hats in L.A. as the Clippers head coach and GM, has been heavily scrutinized during the 2016-17 campaign about the inevitable break-up of his core, especially after failing to make it out of the first round in April.

Chris Paul has now been traded to the Houston Rockets (for a package of players including Patrick Beverly and Lou Williams, among others), while free agent Blake Griffin is back for the next five-years, agreeing to sign a $173 million deal. It was time for a change after a plethora of shortcomings over the last four years in Clipper land.

Glen 'Doc' Rivers still has not found that magic he once had in Boston out in Hollywood despite having a contending roster each of the last four seasons, but for whatever reason the Clippers were not able to get over that hump and even compete in a Western Conferance Final


"We’ve had ample opportunities," said Rivers. "The fiasco in Oklahoma [in 2014], that was a brutal blow. We were about to go to the West finals. The next year, a 3-1 lead, a huge lead, and we blow that [to the Rockets]. We’ve had some self-inflicted wounds on our own. But as far as being a good, solid basketball team, I don’t think we should be ashamed about anything except for not winning it. And that was the ultimate goal." [The Undefeated]

Now with a little roster shake up for the 2017-18 season, not many are giving the Clippers a shot to be a top-four seed in a very competitive west.


"The team that everyone should be looking at is Golden State. Everyone else is just noise until someone proves they can beat those guys," says Rivers about his team being overlooked. [The Undefeated]

With the 10th anniversary of the Celtics championship year coming up this season, it's easy for Rivers to reflect about his time in Boston and his two trips to the NBA Finals in three seasons, that resulted in his only ring.


"Just the whole run," Rivers explained. "Building it from scratch with Danny [Ainge]. That experience alone … when I took the job and we were going to rebuild and then we won the division. After that we did it anyway, which took a lot of guts. We had some things go down our way.

Kevin [Garnett] turning us down [for a trade] allowed us to get Ray [Allen]. That allowed us to get Kevin. So things had to go our way. The thing I liked most about that team was, well, Kevin, Paul [Pierce] and Ray Allen were phenomenal, but if you look at that team, they had a bunch of instigator tough guys. Tony Allen, Leon Powe to [Big] Baby [Glen Davis] to Perk [Kendrick Perkins], James Posey. That team was built to win.

The only mistake was after that year we allowed too many of them to go. We kept changing. That 2010 [NBA Finals against the Los Angeles Lakers] is something that we will think about forever. Perk going down in Game 6. Losing Game 7 was tough for us." [The Undefeated]

Cleary, you can't ask Rivers about winning it all in 2008 and not talk about being just minutes away from a second title in Game 7 of the 2010 Finals against Kobe Bryant and the same Lakers team the Celtics had beaten two years prior, we all remember how that ended in Los Angeles. But is that lost still considered the toughest of Rivers' coaching career?


"Yes. Forever," Rivers answered without hesitation. "When you’re that close to winning something where no one gives you a chance. … No one gave us a chance to be in the Finals that year. We came from the fourth seed. People thought we were down. We were too old. We kind of knew what we were doing. We paced them perfect. In 2008, everyone thought it would take us a year to get it together. We won right away, which tells you how hard it is.

In 2010, everyone thought we were over the hill. What bothers me the most is 2009. When you look at that season, Kevin got hurt when we were on a record clip. We were playing the best basketball. When he got hurt, we never came back that season. Kevin was never the same after that. I always look back like he can’t, but what if Kevin never gets hurt? Do we win two [titles]? Do we win three?

That’s something that you can’t get back. That group was the best group. We still talk. All of us talk. It was a good group." [The Undefeated]

Of course some would argue the beginning of the end for Rivers as the Celtics coach came when Ray Allen decided to take his talents to South Beach and join the Heat in the summer of 2012, after Boston lost in Game 7 of the Eastern Conferance Finals to LeBron James in Miami.

While it's been reported that Kevin Garnett, Paul Pierce, Rajon Rondo and Kendrick Perkins still haven't spoken to Allen since his decision to bolt to the Heat to win another championship, Rivers is optimistic that all parties involved will mend fences before an official celebration of the Celtics 2008 championship team takes place at some point next season at the TD Garden.


"The Ray thing?" asked Rivers. "I don’t know. I think it will [heal]. At the end of the day, that team was as close of a group of any I have ever been around.

So when one leaves, it hurts your feelings. I think that’s what happened with our guys. Ray’s a terrific guy. We all know that. The guys that are with him are terrific. It will get back."

Rivers also added that he's tried to play mediator as well: "Yeah. I’ve tried to, slowly. But I think the time will help them get back together. Well, at least I’m hoping. So far, unsuccessfully. But I do think it will happen." [The Undefeated]

Though they all expressed how they felt about Allen leaving (except for Rondo and Rivers) on the last edition of Garnett's Area-21, they made it seem like they're open to squash the drama, but it's still on Walter Ray to reach out if he truly wants to make peace with his former Celtics teammates.

For those keeping track over the last two months, Allen has yet to respond to his ex-teammates.

As for Rivers, he truly doesn't take for granted his lone championship in Boston as the chase for another one continues in Los Angeles. He can't help but appreciate what it took to be the last team standing back in 2008 and what it has truly meant almost 10-years later.


"It means a lot. It’s won," Rivers said. "I’ve been there twice. But I also know how hard it is. Honestly, without that I probably wouldn’t be coaching. I probably would have stopped. The fact that I realized how hard it is and how tough the chase is, I swear it’s the only reason I coach. I love the chase. I want to get there. It’s pride. It’s hard, man. You have to have luck. You have to have health. Your guys have to play well. They have to make big shots.

There are so many things that go into it. As good as Golden State was last season, they will tell you that. As good as they were and as easy as it looks, they know it wasn’t that easy. It’s hard to win. And I respect that." [The Undefeated]