Kyrie Irving requests trade from the Cavaliers, what does this mean for the Celtics? 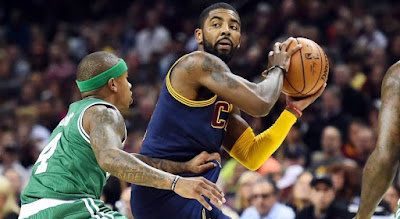 After three years of dominating the Celtics and the Eastern Conferance, it looks like the Cavaliers might not be heavy favorites to reach the NBA Finals this upcoming season.

According to ESPN, Kyrie Irving has formally requested to be traded out of Cleveland after meeting with Cavaliers' owner Dan Gilbert earlier this month.

Irving, 25, reportedly wants to be moved to a team where he will be the focal point in their offense and does not want to play with LeBron James anymore.

Such teams that are on Irving's short list of possible destinations include; the New York Knicks, Miami Heat, Minnesota Timberwolves and the San Antonio Spurs.

Jeff Wechsler, Irving's agent, issued a statement, but would not go into details of his client's meeting with the Cavaliers' higher up.


"Kyrie and I had a meeting with Cavs leadership where we discussed many different scenarios in reference to Kyrie and his future with the team," Wechsler told ESPN. "The basis of those discussions and what went on in those discussions are between the Cavs and us. We are respectfully going to keep those private." [ESPN]

Since the conclusion of the Finals, rumors have been swirling around the Cavaliers that LeBron James, who will be a free agent next summer, could take his talents to the west coast and leave Cleveland for a second time. Losing Irving would also be huge blow for the city and the team's chances of competing for a second title in four seasons.

For the Celtics, this report could not have come at a better time as Danny Ainge continues to shape his roster. A possible trade of Irving, could mean an easier route to a Finals appearance. Will the president of basketball operations take advantage of a vulnerable Cavaliers team and make a power move to put the C's over the top?

Only time will tell.

In the meantime, here's a reminder that despite Kyrie Irving having a 9-8 record in the regular season against the Celtics, he's also 8-1 against Boston when it comes to the playoffs, which includes a ridiculous 42-point performance (a postseason career-high) on 15-of-22 shooting in a Game 4 Eastern Conferance Finals Cavaliers' win over the C's this past May.

Irving is a four-time All-Star, who was drafted No. 1 overall by Cleveland back in 2011, averaged 25.2 points per game, while shooting 47.3 percent from the field last season, both career-highs.

Now let the conversation begin on who would Celtics fans rather have, Isaiah Thomas (drafted No. 60 in 2011) or Kyrie Irving?