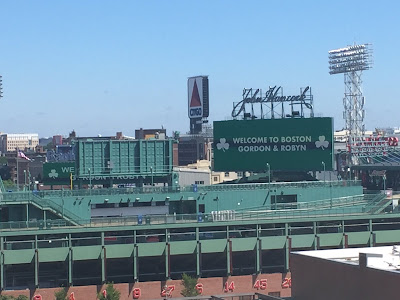 Gordon Hayward's second meeting on his itinerary began with a visit to Fenway Park, home of the Boston Red Sox.

Hayward, along with his wife; Robyn, were spotted at 'America's oldest ball park' with Celtics brass that included Isaiah Thomas and Al Horford.


The Haywards were greeted with a message and a six-minute video on the jumbotron of what it would be like to play in Boston that also included words about the city's fans from Kobe Bryant and LeBron James. Paul Pierce, Kevin Garnett and David Ortiz were among those who also spoke about their experiences of playing in the city.


Hayward arrived in Boston from Miami late on Saturday night, where he was seen with Celtics coach Brad Stevens at Logan Airport. According to sources, the free agent will continue to tour the city before and after an officially meeting as part of Danny Ainge's 'pitch.'


My brother just came back from a mission trip to Nicaragua from Miami to Boston and Hayward was on the flight! Here's a picture with them! pic.twitter.com/rvyvFMED9f
— John Habershaw (@JohnHabershaw) July 2, 2017


By the looks of things the Celtics are off to a great start as Ainge hopes their presentation during Hayward's official free agent visit to Boston will make an impression, that ultimately will factor positively on his final decision.