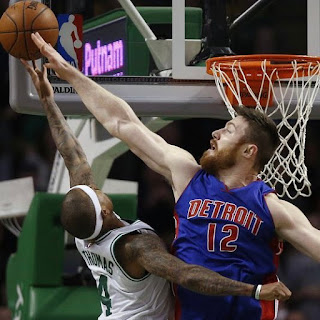 In the wake of Avery Bradley getting traded to Detroit for Marcus Morris on Friday, the Celtics have reportedly added another former Pistons to their roster.

Accroding to Shams Charania of The Vertical, the Celtics have signed center Aron Baynes on a one-year, $4.3 million deal.

Baynes, 30 has played five-years in the NBA including stops in San Antonio, where he served mainly for three seasons as Tim Duncan's back-up, while also winning a championship in 2014 and Detroit, where he's played the last two campaigns. Last year, the 6-foot-10 Australian averaged 5 points and 4.4 rebounds in 75 games for the Pistons, which is what he has averaged for his career (5.2 points, 4.1 rebounds per contest).


With the signing of Bayes, Danny Ainge has added some much needed frontcourt depth, after waiving Tyler Zeller and losing Kelly Olynyk and Amir Johnson to free agency last week. There were also rumors of the Celtics pursuing Spurs' free agent seven-footer Dewayne Dedmon or possibly trading for Grizzlies' All-Star Marc Gasol, who according to reports, is being shopped around.

For now, it looks like the Celtics could be done with their offseason acquisitions, but you never know with Ainge since the addition of Gordon Hayward to the roster.