Report: Heat have emerged as favorite to land Gordon Hayward 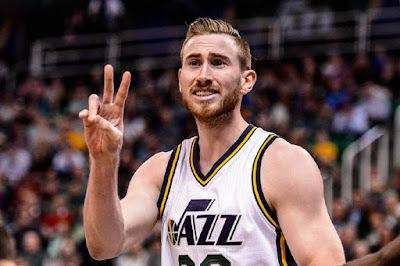 In the last 24 hours, Paul George has been traded to the Oklahoma City Thunder, while Blake Griffin has agreed to re-sign with the Los Angeles Clippers.

If you thought things couldn't get any worse for the Celtics and their fans dreaming of the NBA's next 'super-team' being assembled in Boston this offseason, here's a harsh reality, the Celtics summer plans going forward rest solely on a decision from Gordon Hayward.

While currently in Miami on one of his three planned trips this long weekend, Hayward is probably sipping an umbrella drink down on South Beach with Pat Riley sitting next to him reminding Hayward that he could call this paradise home, if he signs here.

As you're reading this, the 27-year-old free agent is most likely smiling and trying to picture the endless possibilities presented to him by Riley.

If you haven't heard already, the Heat have emerged as the new favorite for Gordon Hayward's services based on three reasons: Miami's lifestyle, Erik Spoelstra's coaching and a scoring role


Of course Miami's year round beach weather beats out Boston's cold, snowy winters, but Spoelstra being a coach Hayward wants to play for should not outdo Brad Stevens and their relationship that dates back to the All-Star's college days at Butler (something Celtics fans have been banking on).

For a while now, the fact that Hayward and Stevens still maintain a friendship to this day has been overblown to a certain extent.

The last point though, about Miami being a place where the offense would run through Hayward is where Danny Ainge should be worried about. Last season in Utah, the 6-foot-8 swingman averaged 21.9 points (career-high) per game on 15.8 shot attempts, while Isaiah Thomas, who finished fifth in MVP voting, averaged 28.9 points per contest on nearly 20 shots.

Would Thomas relinquish his role has the offensive leader for the Celtics for someone like Hayward to flourish in Stevens system? That might be a tough one to answer, especially since Thomas is looking for a payday whether this offseason or next.

At this point the only thing the Heat and Celtics have in common is the fact both teams can offer the same deal of a 4-year, $130 million (give or take a couple of million) contract. But since Riley was able to grab the first meeting on Hayward's itinerary, Miami seems like the more attractive destination for now, especially when they greet you with banners outside the arena you potential could be playing in for the next four seasons.

Miami with the full-court press; decorated AAA Arena & the following at the meeting:


According to sources, Hayward is scheduled to fly to Boston on Sunday. Celtics fans can only hope that Paul Pierce, Kevin Garnett, Bill Russell (anyone but Tom Brady) or some combination of legends and Hall-of-Famers will be on hand with Danny Ainge to 'win' over the last hope of a somewhat 'successful' offseason that so many had envisioned with fireworks.